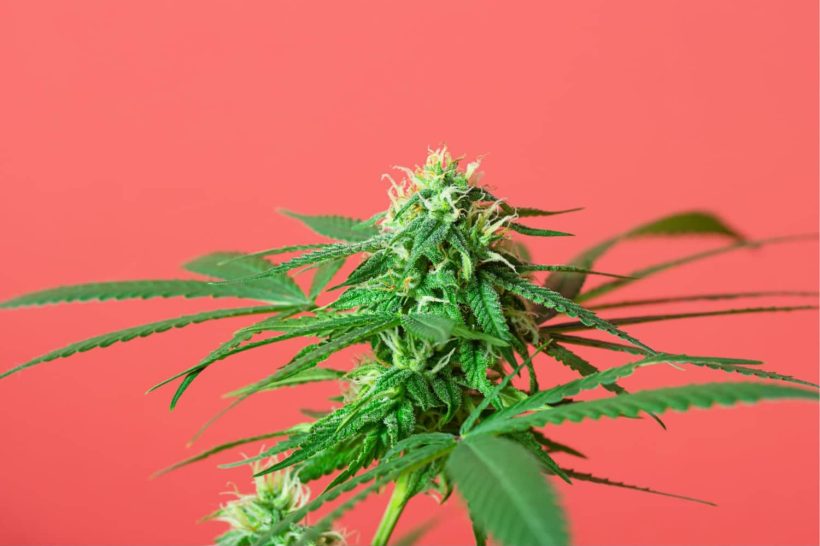 File this under headlines that never would’ve happened ten years ago!

A new review published by scientific journal, Pharmacology Biochemistry and Behavior, has found that marijuana cannabinoid, CBD, is a “promising” therapy for treating cocaine dependence.

Find out more about the studies scientists reviewed – and why they think cannabis could help cocaine addiction – below!

As researchers point out:

There is no gold standard pharmacological treatment for dependence on cocaine. Although several drugs have been investigated, there is no strong or consistent evidence indicating any of these drugs for the treatment of cocaine use disorder.

This lack of treatment is especially alarming given the U.N. World Drug Report‘s estimation that 18 million people between 15 and 64 years of age consumed cocaine in 2017.

Exploring alternative therapies, researchers turned their attention to marijuana cannabinoid, cannabidiol – more commonly referred to as CBD. Known for its antipsychotic and anticonvulsant properties, along with its ability to fight anxiety, regulate motivation circuitry, and manage sleep disorders, CBD has been studied as an addiction-mediator in the past; however, it wasn’t until researchers with Pharmacology Biochemistry and Behavior reviewed cocaine and CBD studies as a whole that a larger, more undeniable picture started to emerge.

In a rigorous systematic review, scientists analyzed 52 studies with the guiding question: What are the effects of the therapeutic use of CBD for the treatment of cocaine dependence?.

After the removal of duplicates, the titles and abstracts of 52 articles were analyzed, 21 of which were considered potentially eligible. After the full-text analyses, 14 were selected for the present review. Most studies were published in the last five years, while the rest were published between 1994 and 2008.

Note: No human studies were found (with the exception of one clinical trial that was ongoing and therefore not selected); all studies focused on animals (i.e., mice/rats).

The studies were then broken into eight categories:

The major findings from each category are outlined below.

While a 2016 article published by the Journal of Psychopharmacology found that CBD did not affect cocaine-seeking behavior, later work featured by Neuropsychopharmacology concluded transdermal application of CBD in gel form for seven days did work:

CBD also reduced experimental anxiety and prevented the development of high impulsivity in rats with an alcohol dependence history.

The results provide proof of principle supporting potential of CBD in relapse prevention along two dimensions: beneficial actions across several vulnerability states and long-lasting effects with only brief treatment.

Likewise, a 2018 Neuropharmacology study found that acute treatment with CBD affected the self-administration of cocaine in mice, reporting a “significant” difference in the consumption of the drug on the 10th day of the study and lower consumption throughout the entire procedure compared to the control group.

In a separate study, the same lead researcher also found that administering 20 mg/kg of CBD for 10 consecutive days resulted in significant reduction in cocaine consumption.

More recently, Neuropharmacology reported that administration of CBD 30 minutes before testing significantly reduced the self-administration of low doses of cocaine compared to the control group. However, no similar effect was found for higher doses.

As summarized by Pharmacology Biochemistry and Behavior:

Of note: An observational human study (not included as part of the formal review) followed up on 25 men who were “strongly addicted to crack” and using cannabis as a therapeutic agent. Although CBD levels are unknown, most participants stopped using crack over the course of nine months, noting that the use of cannabis diminished withdrawal symptoms.

Brain-stimulation reward (BSR) was first profiled in 1954 and refers to a pleasurable or rewarding phenomenon that takes place when certain areas of the brain are stimulated. Its activation is considered one of the cornerstones of addiction and explains why seemingly self-destructive behaviors, such as cocaine use, still “feel good” to the user.

While a 2012 Addiction in Biology study didn’t provide support for CBD’s positive effect on BSR and cocaine use, researchers did note that CBD inhibited the reward‐facilitating effects of morphine:

Our results suggest that cannabidiol interferes with brain reward mechanisms responsible for the expression of the acute reinforcing properties of opioids, thus indicating that cannabidiol may be clinically useful in attenuating the rewarding effects of opioids.

But not to worry. In 2020, researchers demonstrated that CBD was able to block cocaine-enhanced brain-stimulation reward.

As Pharmacology Biochemistry and Behavior points out:

CBD has promising effects on different behaviors related to substance use disorder. The mechanisms of action are not yet fully understood, but the endocannabinoid system is an important component of the reward circuit…

In conditioned place preference (CPP) tests, animals are exposed to a context paired with cocaine that could generate a preference for that context. The test then measures how much subjects prefer areas where they consumed cocaine.

In exciting news, scientists with Psychopharmacology found that low doses of marijuana cannabinoids (including CBD and THC) facilitate the extinction of cocaine-induced conditioned place preference!

A second study also found that mice treated with CBD for 10 consecutive days exhibited a lower preference for the context paired with cocaine. Highlighting the significance of similar findings, a third group of study authors explain:

In addicts, craving and relapse are frequently induced by the recall of memories related to a drug experience. Several studies have demonstrated that drug-related memories are reactivated after exposure to environmental cues and may undergo reconsolidation, a process that can strengthen memories.

We found that CBD impaired the reconsolidation of preference for the environment previously paired with both morphine and cocaine.

[T]hese results provide evidence for the disruptive effect of CBD on reconsolidation of contextual drug‐related memories and highlight its therapeutic potential to attenuate contextual memories associated with drugs of abuse and consequently to reduce the risk of relapse.

Hepatotoxicity, or chemical-driven liver damage, is a serious issue for patients struggling with cocaine addiction. That’s why reports that CBD “significantly” attenuates hepatotoxicity caused by cocaine (as documented by the European Journal of Pharmacology) are so important.

As summarized by Pharmacology Biochemistry and Behavior:

In contrast, CBD is an inhibitor of CYP450… and therefore a potential hepatic protector in this context.

As an example, in a study of the effect of several CP450 inducers on cocaine metabolism, Toxicology and Applied Pharmacology found:

Cannabidiol (CBD), which inactivates P450s 3A and 2C in mice, completely protected mice against cocaine- or norcocaine-induced hepatotoxicity irrespective of whether they were induced or not with PB or PCP.

A more recent study, published by Mediators of Inflammation, reports that CBD reduces acute inflammation of the liver and damage caused by cocaine.

Increased locomotor activity (or essentially: moving around) is a hallmark of cocaine use and another facet reviewed by the present researchers.

While a 2001 study in Biochemical Pharmacology noted that CBD can “markedly inhibit CP450” (discussed above), the effects scientists saw of CBD pre-treatment are “not consistent with the inhibition of… cocaine metabolism.” In fact, researchers in this particular study found that pre-treatment with CBD (30 and 120 mg/kg) actually increased the concentration of cocaine in both the brain and blood, leading to increased locomotor activity. (However, lower doses did not affect locomotor activity in rodents with a cocaine history.)

In another study, researchers found that CBD didn’t alter locomotor activity in either group of tested rats:

Likewise, a 2018 study found that cocaine-induced locomotor sensitization is not affected by CBD treatment ‐ meaning that, unlike the other domains where CBD produced measurable positive effects, when it comes to locomotor activity, CBD doesn’t make it better (but, in most studies, it also doesn’t make it worse).

Now back to that ‘increased levels of cocaine in the brain’ thing. What’s going on?

According to scientific analysts:

Pre-treatment with CBD increased serum and cerebral concentrations of cocaine and its metabolites by as much as 400% compared to a control group.

Despite the increase in the availability of cocaine through the action of CBD, the combination appears to be safe, as the possible negative effects of cocaine may be attenuated by the effects cited in this review as well as the anxiolytic, antipsychotic and neuroprotective properties of CBD.

In other words, while this particular finding might sound scary, the good appears to cancel out the bad. The end result, according to scientists, is safe.

Without getting too technical, researchers with Neuropharmacology found that CBD was capable of attenuating neuroadaptations induced by cocaine (which is a good thing!). Specifically, CBD led to an increase in neuronal proliferation in the hippocampus.

A second study confirmed these results, finding that administering CBD (20 mg/kg) for 10 consecutive days produced an increase in the number neuronal cells and neuronal differentiation in cocaine-consuming mice. Importantly, the study authors also demonstrated that such neurogenic effects are necessary to produce a reduction in cocaine-seeking behavior (meaning what CBD does is really important!).

In 2018, scientists demonstrated that rats with a history of cocaine use exhibited less anxious behavior than controls after administering CBD. Supporting these results, Neuropharmacology researchers found that CBD not only improved anxiety, but also object-recognition (a correlate of declarative memory):

Given that the CBD treatment showed efficient anxiolytic [anxiety-fighting] properties, the improved cognitive performance of the CBD-treated group could be due to a lower anxiety state during testing.

The results of the present review demonstrate that CBD produces anxiolytic effects on animals with and without a history of cocaine use.

In addition to liver damage, cocaine users are also susceptible to seizures. Fortunately, researchers found that CBD can help:

Specifically, scientists found that cocaine-induced seizures are directly related to liver injury and that a reduced hepatic metabolism could predispose users to more severe seizures. According to Pharmacology Biochemistry and Behavior analysts:

The authors then demonstrated that pre-treatment with 30 mg/kg of CBD prevented liver injury and led to less inflammation, in addition to reducing the duration and increasing the time interval between seizures caused by acute cocaine intoxication.

A second study confirmed these findings, showing that CBD is capable of reducing the duration of seizures at doses of 15, 30, 60 and 90 mg/kg as well as increasing the time intervals between seizures at a dose of 30 mg/kg. (Interestingly, pre-treatment blocking of cannabinoid receptors was unable to reverse the effect, indicating that the process occurs through another pathway.)

Analysis of the studies above led researchers with Pharmacology Biochemistry and Behavior to conclude:

The clinical administration of CBD leads to a reduction in the self-administration of cocaine and, consequently, the amount of the drug consumed. Moreover, the reward induced by cocaine is blunted by CBD treatment.

Considering the low toxicity, the absence of severe side effects and the reduction of cocaine-related behavior, CBD is a promising adjuvant in treatment processes for individuals with problems related to cocaine use.

Currently struggling with cocaine addiction or other health issues? Reach out to CannaMD‘s board-certified physicians to learn how medical marijuana can help!

Get Your Medical Marijuana Card Today