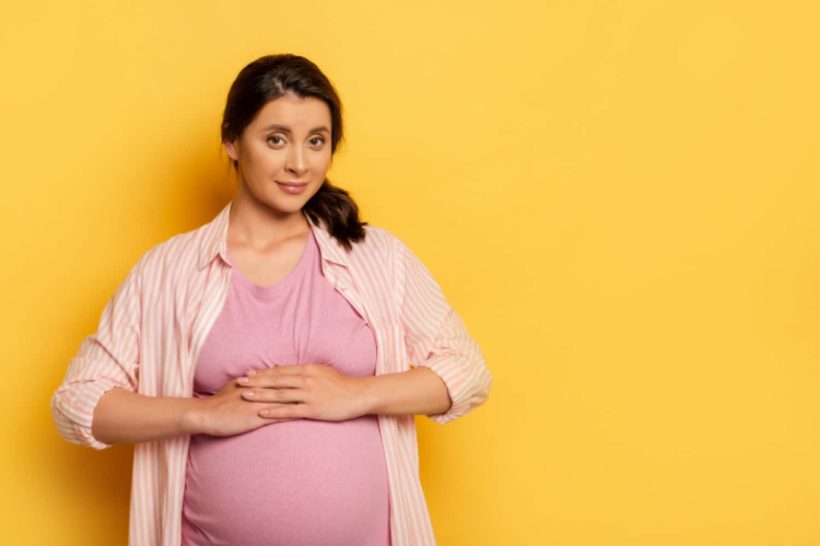 Is it safe to continue cannabis-based therapies during pregnancy? A quick search of the Internet yields conflicting answers, controversy, and cautionary tales.

The issue is further clouded by long-held cultural attitudes. In the mid-20th century era of “reefer madness,” the mainstream view on cannabis and pregnancy was clear: expecting mothers who used marijuana were considered ‘derelict’ and in some cases criminally negligent for the endangerment of their unborn child.

Attitudes on medical marijuana use during pregnancy have evolved in recent years, and more recent research indicates that certain risk factors may be overstated or can be attributed to a more complex range of circumstances. But despite these revelations, both messaging and legalities have lagged. This creates a somewhat confusing landscape for mothers who might benefit from cannabis-based therapies, but are also concerned for the safety of their child and the very real possibility of institutional intervention when marijuana use during pregnancy is documented.

WHO USES CANNABIS DURING PREGNANCY AND WHY?

In a national landscape in which two-thirds of Americans support legalization of marijuana, it’s not surprising that a small but growing number of pregnant women report cannabis use prior to and during pregnancy. A 2019 study published by the Journal of the American Medical Association (JAMA) Network Open looked at self-reported data from more than 360,000 pregnancies and concluded that:

Significantly higher numbers come from the Centers for Disease Control, which in 2019 reported that some 16% of pregnant women aged 18 to 44 years self-reported frequent to daily marijuana use. Data from the National Institute of Health indicates that younger women are more likely to use marijuana during pregnancy, with urine toxicology testing showing that 19% of pregnant women aged 18-25 screened positive for marijuana use.

Which brings us to the question of why expecting mothers would continue to use medical marijuana during pregnancy. Information from a Washington State University summarized by Science Daily indicated that:

Participants reported using marijuana as a way to manage their health issues, from physical issues such as nausea, pain, and difficulty sleeping to psychological issues such as stress, anxiety, and trauma. Many made this decision not just for themselves, but also for their baby.

Many carefully weighed their decision to continue marijuana use during pregnancy and reevaluated their use through each phase of the pregnancy and after giving birth. One common reason why they used marijuana was to avoid using other medications they felt were more harmful to their baby, such as opioids, anti-nausea drugs, and anti-psychotic medications.

As medical marijuana becomes more readily available, it has become an increasingly popular option for the treatment of nausea and morning sickness during pregnancy. A study of expectant mothers in Hawaii showed that some 21% reported severe nausea during pregnancy, and that those suffering from nausea were nearly twice as likely to use marijuana during pregnancy.

A similar small-scale study from British Columbia indicated that more than two-thirds of female medical marijuana users continued their therapies during pregnancy, and those who experienced morning sickness rated cannabis as “effective to extremely effective” for controlling symptoms such as nausea and vomiting.

THERAPEUTIC USE OR DRUG ABUSE?

A longstanding concern surrounding prenatal marijuana use is the threat of legal consequences, and in the eyes of federal law, there is technically no difference between an opioid-addicted mother and one who is employing a cannabis-based therapies during pregnancy. This stems from the fact that despite the ongoing legalization of both recreational and medical marijuana at the state level, cannabis is still classified as a Schedule I substance by the DEA, along with substances such as heroin, cocaine, opioids and methamphetamine. Testing positive for the use of these Schedule I substances during pregnancy has led agencies involved in child protective services to intervene, bringing criminal charges against the mother and mandating loss of custody.

This issue was the subject of a 2017 report from Amnesty International which stated:

While pregnant women remain subject to the same laws as anyone else, an additional set of legislation targets pregnant women, particularly those who are marginalized and those who use drugs, based on a belief that they have caused or risked harm to their fetus.

Often known as “fetal assault”, “chemical endangerment” or “personhood” laws, these measures have been used to arrest and prosecute women who experience pregnancy complications and conditions such as drug dependence. A patchwork of evolving laws and practices impact women in every region and state.

The recent opioid crisis has lead to an increase in prenatal and neonatal drug testing, and calls for universal drug screening for pregnant mothers. Such measures might further cloud the issue, because some current testing methods cannot differentiate between THC and CBD content, creating potential problems for users of non-intoxicating CBD-based therapies.

Universal testing is unlikely under current laws, as a 2001 Supreme Court ruling stipulates that pregnant women cannot be tested for drugs without consent and the American Bar Association has stated that “illegal drug use while pregnant is not child abuse.”

The good news for those who choose cannabis-based therapies during pregnancy is that actual instances of prosecution for marijuana use during pregnancy remain relatively rare. Anecdotal reports suggest expectant mothers engaged in responsible cannabis-based therapies are at far less risk of prosecution that individuals involved in chronic recreational use combined with other behaviors that are deemed harmful to mother and child.

WHAT ARE THE ACTUAL RISKS INVOLVED WITH PRENATAL MARIJUANA USE?

Legalities and cultural attitudes aside, expectant mothers are still faced with the primary concern over prenatal cannabis use, which is the potential risk to the unborn child. As mentioned earlier, there is a longstanding cultural belief that abstinence is the best policy, and both medical and legal attitudes have long been shaped accordingly. Further, both opponents and proponents of medical marijuana can cite individual studies supporting their chosen position. In this environment of assumptions and conflicting information, the best answers come from those who step back and take a broader look based on all available information.

This was the goal of a research team looking to identify possible adverse physical outcomes related to prenatal cannabis consumption. Using a broad-based approach that looked at all available and relevant studies, the researchers crunched the collective data and found that at first pass it appeared that children of mothers who used marijuana during pregnancy did exhibit a small, but statistical significant, incidence of low birth weight and premature delivery. However, the authors then went on to factor in additional variables such as concurrent use of tobacco and other substances during pregnancy. Adjusting for these factors lead them to the conclusion that:

A 2017 study published in the American Journal of Obstetric Gynecology came to similar conclusions, stating that:

[M]aternal marijuana use was not associated with a composite of small for gestational age, spontaneous preterm birth, or hypertensive disorders of pregnancy.

The authors did conclude that there was an approximate 3% increase in the risk of neonatal morbidity associated with  maternal marijuana use. To put this number in perspective, incidences of neonatal deaths in the United States average around 3.9 per thousand births. This study would suggest that the risks associated with marijuana could raise that number to 4 per thousand. Results do not differentiate between heavy recreational users and mothers engaged in medical cannabis programs.

While studies such as those mentioned above have largely allayed or negated fears of adverse physical outcomes from neonatal cannabis therapies, the question of potential neurological impairment has remained a topic of discussion. The most definitive answer to date on the subject comes from a May 2020 “study of studies” published in Frontiers of Psychology.

To create this report, researchers at Columbia University, the New York State Psychiatric Institute and Swinburne University reviewed more than 1,600 peer-reviewed articles and studies on the cognitive effects of prenatal cannabis exposure in humans. After thorough review of all information, the authors eventually identified the 40 most relevant studies which were selected for analysis and comment. Based on statistical comparisons of groups totaling 1,001 participants, with follow-ups ranging from 2 to 20-plus years, the authors wrote that:

Despite analyzing studies spanning approximately three decades, we conclude the evidence does not support an association between prenatal cannabis exposure and clinically relevant cognitive deficits.

In their concluding remarks, the authors of the report cited above noted that there were limitations to current research, and that future studies should take into account a broader range of factors and outcomes. They also touched on the broader issues surrounding prenatal marijuana use, writing:

We are concerned that a misunderstanding of the relationship between prenatal cannabis exposure and subsequent cognitive functioning leads to an oversimplification of the complex relationships between socioeconomic factors and functioning of the individual whether drug use is involved or not.

Misinterpretations of the complex interactions of relevant factors in itself can cause harm to pregnant women and their children by leading to punitive policies and enhancing unwarranted stigma. In some cases, intense stigma has resulted in removal of children from their families, and even in maternal incarceration.

The rationale for such policies is, in part, that prenatal cannabis exposure causes persistent deleterious effects, especially on cognitive functioning. Findings from this review suggest that this assumption should be reevaluated to ensure that our assumptions do not do more harm than the drug itself.

For women who are considering pregnancy or are currently expecting, the collective information would seem to suggest that responsible medical cannabis therapies would not lead to a dramatic increase in adverse outcomes, but that anyone contemplating such therapies should be well-informed and seek the advice of medical professionals who are similarly up to date on the latest relevant research.

According to Florida Senate Bill 8A:

A physician may not issue a physician certification, except for low-THC cannabis, to a patient who is pregnant.

As defined by Senate Bill 8A:

“Low-THC cannabis” means a plant of the genus Cannabis, the dried flowers of which contain 0.8 percent or less of tetrahydrocannabinol (THC) and more than 10 percent of cannabidiol (CBD) weight for weight; the seeds thereof; the resin extracted from any part of such plant; or any compound, manufacture, salt, derivative, mixture, or preparation of such plant or its seeds or resin that is dispensed from a medical marijuana treatment center.