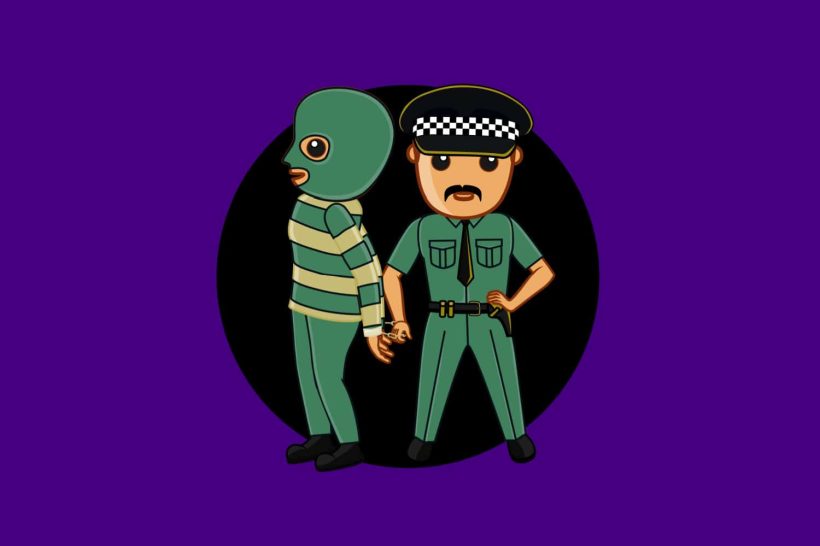 Over the past 50 years, marijuana use has been blamed for millions of criminal acts. But while this statement may seem alarming at first, it loses impact when placed in context. The overwhelming majority of marijuana-related arrests and convictions stem from the mere possession of what federal authorities continue to consider a Schedule I drug under the Controlled Substances Act.

Legalization of marijuana at the national level would result in an immediate de facto reduction in crime statistics, as many millions of otherwise legal marijuana users would no longer be considered criminals. But manipulation of the numbers isn’t the real story. There is substantial evidence that the legalization of marijuana may result in a reduction in both violent and property crime rates. The most recent reporting on the subject indicates that these societal benefits may have been underestimated in previous studies.

The U.S. federal government’s longstanding policy known as the “War on Drugs” is predicated on the assumption of a causal link between crime and drug usage, and on the belief that harsh penalties for drug possession will lead to a reduction in crime rates. In the decades that followed the implementation of this program by the Nixon administration, marijuana-related arrests more than tripled, and the number of individuals incarcerated for these offenses increased ten-fold.

During these same years, crime rates failed to plummet. Instead, the very illegality of marijuana led to new forms of crime associated with trafficking activities such as turf war violence, drug-related robbery, and money laundering. Prioritizing drug enforcement often draws police away and can result in a diminished ability to address other types of crime. A case study on the subject from Florida State University concluded:

In addition to being proved largely ineffective at stemming illegal traffic use or reducing crime, the “War on Drugs” policy has proven to be quite expensive, with annual expenditures at the state and federal level reaching $50 billion a year. Critics of U.S. drug enforcement policy have also noted the significant costs associated with drug-related incarcerations and the increasing trend towards militarization of police forces through the Pentagon’s 1033 Program.

The War on Drugs is primarily a war on marijuana, since the vast majority of arrests made and resources spent have been focused on marijuana offenses. In recent years, drug arrests in general, and marijuana possession arrests in particular, have been increasing while at the same time the rates of serious crimes have been decreasing.

The article makes the following points on the ways marijuana legalization would benefit the criminal justice system:

By the 1990s, the recognized failures of harsh federal cannabis laws combined with an increasing societal acceptance of marijuana use led to the first steps toward legalization, with California taking the first leap with the 1996 passage of Proposition 64 — the Adult Use Of Marijuana Act. As other states followed California’s example in subsequent years, researchers were presented with a unique opportunity to answer a range of questions and concerns long voiced by opponents of marijuana legalization. Conclusions drawn from a variety of metrics gathered over periods of a decade or more were presented and reviewed. In almost all cases, the answers and insights gleaned from these research efforts painted marijuana legalization in a positive light with regards to its relationship to crime.

The first and most general assertion gleaned from recent studies is that legalization of marijuana does not cause an increase in overall crime rates. Based on a 25-year assessment of data from state and national crime databases, a study released by the Victoria University of Wellington, concluded:

We do not find evidence that medical marijuana laws consistently affect violent and property crime. […] Our results suggest that liberalization of marijuana laws is unlikely to result in the substantial social cost that some politicians clearly fear.

A multi-year study of crime rates in California and Colorado, the first two states to legalize marijuana use, came to a similar conclusion, noting that there was “no statistically significant long-term effects of recreational cannabis laws or the initiation of retail sales on violent or property crime rates in these states” and that “[marijuana] legalization has not had major detrimental effects on public safety.”

A common argument offered by anti-legalization advocates has been the concern that dispensaries would themselves become a target for robbery and property crimes. This concern was addressed in a 2018 report by the RAND Corporation, which concluded:

We find no evidence that ordinances allowing for marijuana dispensaries lead to an increase in crime. We find no effects on burglary, robberies, or assaults, which are the types of crimes one would expect if dispensaries were prime targets as a result of their holding large amounts of cash. […] In fact, we see some evidence of a reduction in property crime.

This finding was reinforced by a 2014 review of  FBI crime data that found:

Medical marijuana legalization is not predictive of higher crime rates and may be related to reductions in rates of homicide and assault… [R]obbery and burglary rates were unaffected by medicinal marijuana legislation, which runs counter to the claim that dispensaries and grow houses lead to an increase in victimization due to the opportunity structures linked to the amount of drugs and cash that are present. …. [T]his is in line with prior research suggesting that medical marijuana dispensaries may actually reduce crime in the immediate vicinity.

Cannabis May Lead to Crime Reduction

A number of studies have reinforced the association between the legalization of marijuana and a reduction in both violent and property crime. In 2019, the Journal of Economic Behavior & Organization stated:

First-pass evidence is provided that the legalization of the cannabis market across U.S. states is inducing a crime drop.

We exploit the staggered legalization of recreational marijuana enacted by the adjacent states of Washington (end of 2012) and Oregon (end of 2014).  [Our model shows] a significant reduction in rapes and property crimes on the Washington side of the border in 2013–2014 relative to the Oregon side and relative to the pre-legalization years 2010–2012. The legalization also increased consumption of marijuana and reduced consumption of other drugs and both ordinary and binge alcohol.

A study by the IZA Institute of Economics draws similar conclusions from this data, and adds the notation that the observed decrease in violent crimes that accompanies the legalization of marijuana might be attributed to:

[Users’] substitution away from drugs which have remained illegal and from alcohol, which makes consumers more aggressive than if consuming cannabis.

Several positive effects of marijuana legalization in relationship to crime rates have also been well documented. Among these are:

* Crime Reduction in Border States: Results from a study published in The Economic Journal were “consistent with the theory that decriminalization of the production and distribution of marijuana leads to a reduction in violent crime in markets that are traditionally controlled by Mexican drug trafficking organizations.” The report noted that this effect was strongest in counties located within 200 miles of the U.S./Mexico border.

* Improved Crime Clearance Rates: According to a 2018 report in the Police Quarterly, the court clearance rates for violent and property crimes improved in California and Washington state following the legalization of marijuana. This was attributed to law enforcement resources no longer being diverted to the enforcement of marijuana laws.

* Decrease in Smuggling Activity: A 2018 report from the Cato Institute noted that, “After decades of no progress in reducing marijuana smuggling, the average Border Patrol agent between ports of entry confiscated 78 percent less marijuana in fiscal year  2018 than in 2013.” The explanation for this trend was that “state marijuana legalization starting in 2014 did more to reduce marijuana smuggling than the doubling of Border Patrol agents or the construction of hundreds of miles of border fencing did from 2003 to 2009. As more states [legalize marijuana] these trends will only accelerate.”

Marijuana Benefits May Have Been Underestimated

The most recent insights on the relationship between marijuana legalization and crime rates come from a working paper from Appalachia State University’s Department of Economics, published in October 2021. For the most part, the conclusions put forward in this paper largely reinforce previous studies, and provide similar insights. What is most noteworthy about this document is the author’s assertion that previous studies may have underestimated the degree to which marijuana legalization plays a role in reducing crime rates. The reason for these discrepancies is explained as a lack of complete reporting from law enforcement agencies, which leads to the under-reporting of certain key data sets.

The methodology employed by the Appalachia State is explained in great detail in the paper, but  is beyond the scope of this article. The most significant takeaways generated by the author’s advanced modeling is provided in a summary of the concluding remarks:

We find evidence that ending marijuana prohibition results in larger reductions in violent crime rates in states that border Mexico and in urban counties.

Previous estimates of the effect of medical marijuana laws on crime have underestimated the reduction in crime from ending marijuana prohibitions.

How to Legally Try Medical Marijuana