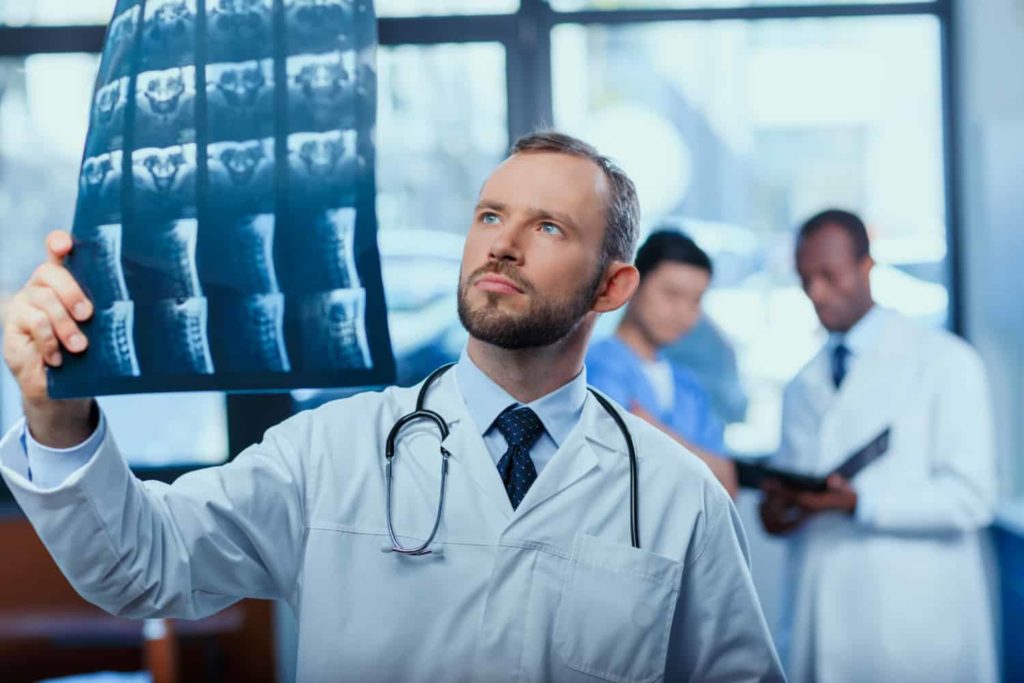 In recent years, research has revealed that two of marijuana’s major cannabinoids — THC and CBD —  can interact with the human endocannabinoid system to influence bone healing and regeneration. These findings could point to new cannabis-based therapies for both the healing of broken bones and the slowing of degenerative osteoporosis.

Following the discovery of the endocannabinoid system in 1992, early research focused primarily on its effects on the central nervous system. The cannabinoid receptor known as CB1, which occurs in heavy concentration in the brain, was identified as playing a role in pathophysiological events ranging from memory deficits to neurodegenerative disorders. THC exerts a significant influence on CB1 receptors to elicit the psychoactive responses that create marijuana’s well-known “high.”

A second category of receptors, known as CB2, was found to exist throughout the body, with significant concentration in the bloodstream, liver, spleen, and bones. CB2 receptors play a major role in maintaining the body’s immune system, including the regulation of cellular inflammation, and do not seem to produce psychotropic effects. CBD is known to provoke beneficial responses through the stimulation of CB2 receptors, and THC and CBD often work in consort to interact with CB2 receptors in complex ways that spur a diverse range of effects.

Human bones contain both CB1 receptors, which are located primarily in sympathetic nerve fibers, and CB2 receptors which are more widely integrated into bone mass and marrow. These receptors regulate the activity of both osteoblasts, which are the cells that create new bone mass, and osteoclasts, which reabsorb existing and damaged bone mass as part of the body’s ongoing bone remodeling and maintenance process.

Based on the findings that select cannabinoids in marijuana can stimulate CB2 receptors, a number of researchers have investigated the potential therapeutic use of CBD and THC in bone healing. A recent study documented bone healing in rodents with broken femoral bones, in which subjects were injected with a formula of either THC or CBD. As compared to a control group, subjects given either THC or CBD initially showed a decrease in the callus formation which is the precursor to hard bone regrowth. At the four week mark and beyond, however, this trend reversed, resulting in an increase in new bone development.

Neither THC or CBD resulted in a faster healing process, but at the eight-week point, subjects that were administered CBD showed a 35 to 50% improvement in key measures of bone strength and resilience as compared to the control group. A THC/CBD combination was also administered to subjects, and this combination yielded slight additional increases in bone strength and stiffness midway through the healing process.

In their summary, the study’s authors noted:

These findings might indicate that cannabis therapies with a higher CBD content would prove more beneficial for bone healing and regrowth. What was not noted was the possibility of other potential benefits that the THC component of cannabis might contribute, including enhanced pain management and the additional stimulation of CB1 and CB2 receptors.

The degenerative condition known as osteoporosis is caused by an imbalance in the relationship between osteoclasts, which reabsorb bone in a period of weeks, and osteoblasts, which require months to produce new bone.

Based on the discovery that ongoing osteoclast production coupled with a decrease in osteoblast formation is the cause of osteoporosis-related bone loss, researchers have postulated that “optimal pharmacological management of osteoporosis should aim at decreasing bone resorption and stimulating bone formation” and that the stimulation of CB1 and CB2 receptors “may be of value in the treatment of osteoporosis and other bone diseases.”

The fact that both THC and CBD  are able to bind with both CB1 and CB2 receptors suggests their potential benefits for the slowing or reversal of bone loss associated with osteoporosis. This possibility was raised by the authors of a study published in the British Journal of Pharmacology, which concluded:

Recent studies in mice and humans suggest an important role for the endocannabinoid system in the regulation of skeletal remodeling and the consequent implications on bone mass and biomechanical function.

Taken together, the reports on cannabinoid receptors in mice and humans pave the way for the development of cannabinoid drugs to combat osteoporosis.

As new research on marijuana’s potential effects on bone health and healing is reported, CannaMD will continue to provide updates.

Get Your Medical Marijuana Card Today!