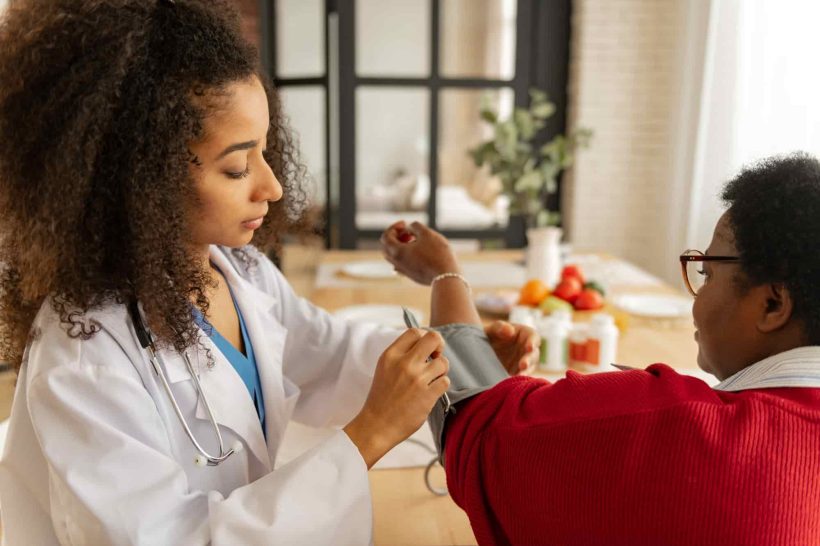 If you search the Internet, you’ll quickly find that medical marijuana’s effect on the heart is quite the subject of debate. Some scholarly articles purport that marijuana can negatively affect the cardiovascular system, while others indicate that it has benefits for heart health.

Today, CannaMD takes a closer look at current research to uncover the truth about how marijuana affects hypertension.

The CDC also notes that:

Clearly, high blood pressure is a major health concern for many Americans. Finding ways to treat and manage the condition effectively is a top priority in the medical community.

The endocannabinoid system plays a part in regulating many of the body’s systems, including the cardiovascular system.

When vascular tissue releases endocannabinoid neurotransmitters (like anandamide and 2-arachidonoylglycerol), they activate CB1 and CB2 receptors. This stimulates arteries to relax, reducing the heart’s required effort to pump blood. This process can be activated as a stress response to a heart attack or circulatory shock to protect against arrhythmia and tissue damage.

Endocannabinoids also play a role in long-term heart health, with studies indicating that they may reduce age-related cardiac dysfunction.

An animal study published in Future Medicine found that the cannabinoid THC can stop the progression of atherosclerosis (a disease caused by the build-up of cholesterol plaque in the arteries). The authors concluded:

[O]ral treatment with a low dose of THC inhibits atherosclerosis progression in mice through pleiotropic immunomodulatory effects on inflammatory cells. All these effects were mediated via the cannabinoid receptor CB2, the main cannabinoid receptor expressed on immune cells.

According to a study published in Circulation, endocannabinoids can also increase vascular dilation to normalize blood pressure. The study concludes:

[E]ndocannabinoids tonically suppress cardiac contractility in hypertension and that enhancing the CB1-mediated cardiodepressor and vasodilator effects of endogenous anandamide by blocking its hydrolysis can normalize blood pressure.

Targeting the endocannabinoid system offers therapeutic strategies in the treatment of hypertension.

This conclusion was echoed by a 2005 literature review on how endocannabinoids and their receptors regulate blood pressure:

The endocannabinergic system plays an important cardiovascular regulatory role not only in pathophysiological conditions associated with excessive hypotension but also in hypertension. Thus, the pharmacological manipulation of this system may offer novel therapeutic approaches in a variety of cardiovascular disorders.

The fact that THC lowers blood pressure in animals has been scientifically established since the 1970s. Early research drove future studies on the therapeutic potential of cannabinoids as blood pressure regulators. One significant study published in 1979 found that inhaling THC raised the heart rate of hypertensive patients for a brief period before initiating a drop in both systolic and diastolic blood pressure.

Notably, the effect was more substantial in people with high blood pressure:

The intensity and duration (3-4 hours) of the arterial and ocular pressure responses to THC were greater in hypertensives than in normotensive patients.

Unfortunately, initial excitement over marijuana’s potential to treat high blood pressure was tempered by conflicting reports on its long-term efficacy. Some animal studies found that THC tolerance produced by continued use negated the hypotensive benefit, while other research found no evidence of long-term use of THC being associated with the development of tolerance.

More recently, an increased understanding of the chemistry behind THC’s hypotensive effects has sparked a renewed interest in the topic. A 2000 literature review published in Chemistry and Physics of Lipids states:

Cannabinoids, the bioactive constituents of the marijuana plant and their synthetic and endogenous analogs cause not only neurobehavioral, but also cardiovascular effects. The most important component of these effects is a profound decrease in blood pressure and heart rate.

A 2021 study looked at hypertensive adults over 60 who had been prescribed medical marijuana. After three months of treatment with cannabis, the researchers found that participants experienced an average 5 mmHg decrease in systolic blood pressure and an average reduction of 4.5 mmHg when it came to diastolic blood pressure. This lowered blood pressure benefit peaked at three hours post cannabis administration and remained significant 24 hours after dosing.

Conflicting reports on the long-term safety of medical marijuana use have sparked debate surrounding cannabis and its potential for normalizing blood pressure. A report published in the American Journal of Medicine performed a behavioral risk factor analysis of about 130,000 adult marijuana smokers. The authors gave a concerning warning when they concluded:

Frequent marijuana smoking is associated with significantly higher odds of stroke and myocardial infarction or coronary artery disease, with a possible role in premature cardiovascular disease.

It should be noted that this type of analysis does not always offer the most accurate illustration of risk. The study looked at both recreational and medical cannabis users without accounting for other lifestyle variables that might impact an individual’s risk for cardiovascular diseases, such as diet or exercise habits.

A study published in the American Journal of Cardiology explains why these confounding variables can skew results:

In multivariate analysis, the associations between marijuana use and systolic blood pressure and triglycerides disappeared, having been mainly confounded by greater alcohol use in marijuana users.

The authors go on to state:

In conclusion, although marijuana use was not independently associated with cardiovascular risk factors, it was associated with other unhealthy behaviors, such as a high caloric diet, tobacco smoking, and other illicit drug use, which all have long-term detrimental effects on health.

In fact, a 2020 study that looked at the association between cardiovascular disease and marijuana use concludes:

Our study found that there is no link to marijuana use and an increase in cardiovascular disease.

A 2021 literature review published in the American Journal of Medicine supports this position, with the researchers concluding:

Marijuana itself does not appear to be independently associated with excessive cardiovascular risk factors.

Clinical research surrounding medical cannabis as a treatment for hypertension is still in its infancy. CannaMD will continue to provide updates as the scientific community encourages more research to provide a clearer picture of marijuana’s impact on hypertension.

CannaMD has a team of trusted physicians who can evaluate your eligibility for medical marijuana and help you decide if it’s the right treatment for you. Give us a call at (855) 420-9170 or fill out our quick online application to get started!