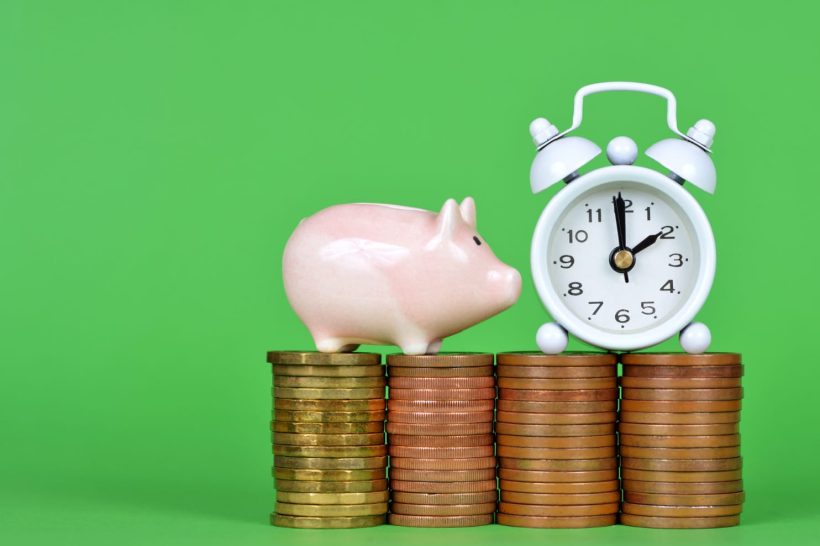 In the United States, most cannabis research to date has focused on the potential harms of the plant, instead of its benefits. Consultant Jim Hudson works for a number of medical research charities and compiled a comprehensive list of how the top 50 U.S. funders use their money for cannabis research.

His findings are sure to alarm medical cannabis professionals and patients alike.

One of the largest U.S. research funders, the National Institute on Drug Abuse (NIDA), spent over $1 billion between 2000 and 2018, with a heavily slanted focus on cannabis abuse and misuse, as well as the negative effects of cannabis. During the same time period, U.S. research on marijuana harms – such as cannabis withdrawal, treatments for substance abuse and use/exposure during pregnancy or infancy – received 20 times more funding than research on cannabis therapeutics.

Overall, U.S. cannabis research funding has increased from $30 million to nearly $145 million in the last 20 years. While some funds are being used to study cannabis medical treatments, the majority of funding is still used to research harms. Over $1.5 billion has been spent on cannabis research in the last two decades in the U.S., Canada, and the United Kingdom combined, with approximately half devoted to investigating potential harms. The U.K. research scene is also dominated by research on the harmful effects of cannabis, but Canada has dedicated much more funding to positive cannabinoid research. 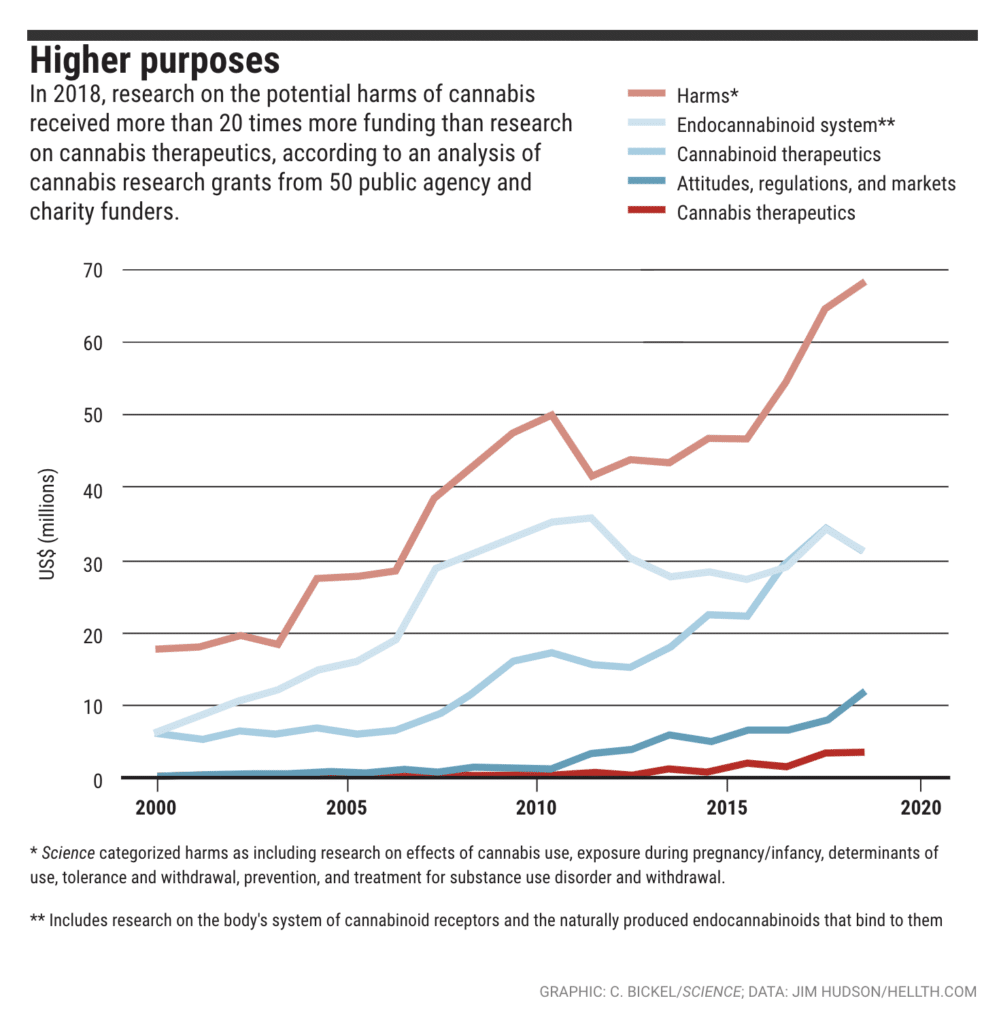 Why isn’t more research done in the U.S. on cannabis-derived compounds like CBD that can be used as therapeutic drugs? A country’s legalization status has a direct influence on where the funds go. In Canada, recreational marijuana use was legalized in October 2018. As such, universities such as McMaster University and McGill University, among others, have built dedicated and comprehensive research programs. Non-profit organizations like the Canadian Consortium for Investigation of Cannabinoids (CCIC) were also formed to do research. However, things were not all rosy.

Nearly a year after legalization, researchers stated that the Canadian government could not keep up with requests to do research, and many frustrated researchers say they are still waiting for the government regulations to catch up. To pick up the pace, Canadian cannabis producers like Atlas Biotechnologies have provided private funding to U.S. research institutions like Harvard Medical School’s International Phytomedicines and Medical Cannabis Institute.

Researchers in the U.S. are even more frustrated, describing the mechanisms for cannabis research as “broken” with a “ridiculous set of laws” that have prevented good and timely research. Under U.S. federal law, cannabis is still classified as a Schedule I drug, the most restrictive classification.

As a Schedule I drug, cannabis is viewed as having “high potential for harm with little to no medical benefit.” To be rescheduled, researchers must demonstrate evidence of medical benefit, which is nearly impossible to do given the research restrictions. Hence, researchers are caught in a vicious cycle.

Supply of research cannabis is very restricted. Because of its classification under U.S. federal law, only a single farm operated by the University of Mississippi is allowed to grow research-grade cannabis. The university’s contract has been in place with NIDA for over 50 years, explaining why many researchers refer to the situation as the “Mississippi Monopoly.” Massive government restrictions hamper the supply, causing the entire operation to move at a glacial pace.

To make matters worse, researchers have long complained about the poor quality of the highly processed product they receive. The cannabis is dried and stored for long periods of time, even years, at -20 degrees Celsius. After researchers complained that past product was riddled with mold, the university was instructed to irradiate the plants to kill mold and yeast. The end result is a powdery low-potency substance that is not representative of what people are actually consuming today in the 30+ states that have legalized cannabis for medical and/or recreational use.

WILL THE U.S. GOVERNMENT CHANGE ITS STANCE ON MARIJUANA RESEARCH?

Lately, there has been some movement on the U.S. stance on marijuana.

Due to the severe legal restrictions, it is very difficult for researchers to get government permission to do whole-plant research. Instead, researchers must focus on isolated cannabinoids, which limits the breadth of investigation that can be accomplished. However, the government says it is making strides to expand research. In March 2020, after nearly four years of delays, the U.S. Drug Enforcement Agency (DEA) announced that it will evaluate 37 additional grower applications. While some describe the move as “monumental” to further clinical trials, other researchers are not so encouraged because they say that changes to federal rules can take years, and that this is the DEA’s way to quell pressure to delay the ultimate decision even longer.

One such rule requires that all growers turn over all marijuana and by-products to the DEA shortly after harvest. The DEA would then be the exclusive distributor. The DEA defends its proposed rules, stating that the complexity is required to comply with federal law and international treaties like the 1961 Single Convention on Narcotic Drugs Treaty designed to combat drug trafficking.

At a recent meeting in Vienna of the United Nations (UN) Commission on Narcotic Drugs (CND), the U.S. government expressed support for the WHO’s recommendation to give cannabis a less restrictive global drug scheduling category, while at the same time opposing many other reforms after expressing concern over the proposals hastening U.S. or worldwide legalization.

Many states like Colorado that have legalized marijuana have also created Department of Health research programs and have allocated state money despite the federal restrictions on research. Furthermore, since 2014, the U.S. Department of Defense has spent several million dollars on cannabinoid research.

In August 2020, the U.S. Food and Drug Administration (FDA) updated its guidelines regarding cannabis-based drugs. In particular, the guidelines could allow for fewer restrictions on CBD, allowing it to be marketed as a dietary supplement or even a food item. To date, the FDA has only approved one cannabis-derived drug, Epidiolex, to treat rare forms of epileptic seizures. Most meaningful to researchers, the FDA guidelines include a new outline for research in drug manufacturing.

Despite the tremendous interest in the potential medical benefits of cannabis, U.S. research is still woefully lacking. While some researchers are encouraged by the latest trends of big U.S. government agencies toward cannabis, many expect that there will be limited funding for therapeutic research at least for the next few years.

While the government may be behind, CannaMD physicians are leading the charge – collaborating on multiple university research studies and educating patients at every opportunity. To learn more about medical marijuana and/or to get your medical cannabis card, simply call (855) 420-9170 or complete CannaMD‘s easy online application.