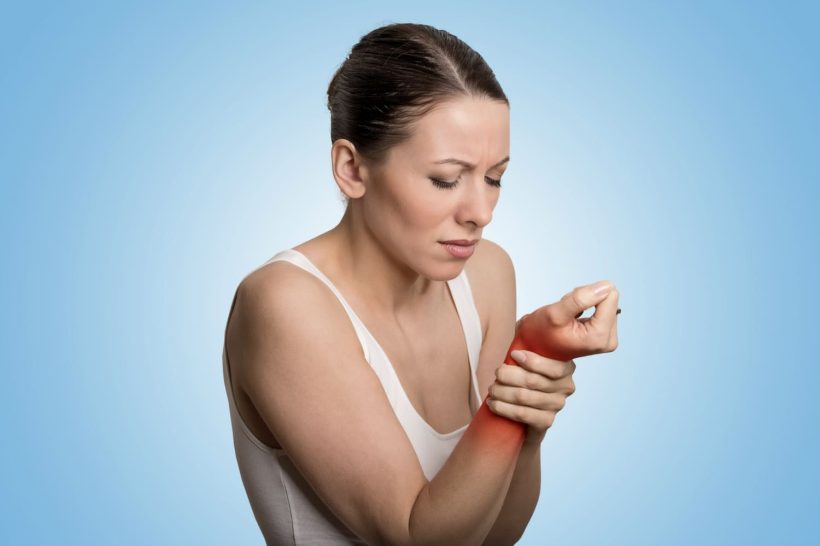 In the United States, 23% of all adults – over 54 million people – have arthritis. This disease can affect all age groups, but is most common in older populations. With the continued aging of the U.S. population, prevalence of arthritis is expected to increase to an estimated 78.4 million (or 25.9% of the adult population!) by the year 2040.

While there is no known cure, the National Academies of Sciences, Engineering, and Medicine found that in adults with chronic pain, patients who were treated with cannabis or cannabinoids are more likely to experience a “clinically significant” reduction in pain symptoms.

Read on to learn more about how medical marijuana may help arthritis patients!

Arthritis is the swelling or inflammation of the joints, surrounding tissues, or connective tissues in general. Symptoms vary depending on the type of arthritis, but pain, inflammation, and stiffness are the most common. These symptoms can alter a person’s overall function and mobility, which can result in limitations on activities of daily life.

There are five common types of arthritis:

Osteoarthritis is the most common form of arthritis, affecting over 30 million adults. Osteoarthritis is popularly known as the “wear-and-tear” type of arthritis, frequently affecting commonly used joints such as the hips, hands, and knees. This type of arthritis wears away at the cartilage between joints, whittling away at the ‘safety tissue’ separating bone. The exposure of this bone and subsequent wear-and-tear can cause pain, stiffness, and swelling. As osteoarthritis worsens, daily activities may become more difficult and ultimately lead to disability.

Rheumatoid arthritis, on the other hand, is an autoimmune and inflammatory disease in which the immune system erroneously attacks healthy cells. The lining of the affected joints becomes inflamed, causing pain, stiffness, weakness, swelling, fatigue and potentially tissue deformity. Rheumatoid arthritis can affect many joints at once, most often impacting the hands, wrists, and knees, but occasionally affecting organs like the lungs, heart, and eyes.

Arthritis by the Numbers

According to the Centers for Disease Control and Prevention (CDC):

Arthritis affects 54.4 million U.S. adults, about 1 in 4. It is a major cause of work disability in the United States and one of the most common chronic conditions in the nation. Arthritis is a common cause of chronic pain.

From 2013 to 2015 in the U.S., 26% of women and 19.1% of men reported doctor-diagnosed arthritis at some point in their life. Arthritis can cause extreme difficulty in daily activity, and is considered one of the leading causes of work disability in the U.S.

According to the CDC, 1 in 25 adults aged 18 to 64 years face work limitations they attribute to arthritis, with at least 1 in 4 of the affected population having work limitations.

Broadening the scope of limitations beyond work, an estimated 44% (or 35 million adults) report having arthritis-related activity limitations in their daily lives.

As of 2015, 21.5% of Florida’s population experienced arthritis. The diagnosis was more common in women, with 24.75% of the affected population being female, as opposed to only 18.01% being men. Of affected individuals, nearly 45% had work limitations, and nearly 55% had limitations extending to normal daily activity.

Arthritis is one of many diseases that can damage the body’s tissues, triggering unique neurotransmitters known as endocannabinoids, which are responsible for regulating pain and inflammation. The endocannabinoid receptors that modulate sensations of pain are also targeted by cannabinoids, chemically similar compounds that are present in marijuana.

In 2013, researchers with PloS One suggested that joint damage and endocannabinoid receptor expression (specifically, CB2 receptors) may be related. Their study found that:

Activation of CB2 receptors inhibits central sensitization and its contribution to the manifestation of chronic osteoarthritis pain.

Nearly 38% of Americans are suffering from severe joint pain attributable to arthritis. In 2015, the Journal of the American Medical Association concluded:

Use of marijuana for chronic pain [and] neuropathic pain… is supported by high-quality evidence.

Canadian researcher Dr. Jason McDougall, a professor of pharmacology and anesthesia at Dalhousie University in Halifax, is currently researching medical marijuana’s impact on arthritic joint pain. His findings thus far have shown that cannabis molecules have the ability to attach to receptors on the damaged nerves and block the firing of pain signals in the joint.

[The nerves are like] wires that have been stripped of their coating. They’re all bare, they’re all raw and responsible for feeling a lot of pain. What we hypothesize is that by locally administering these cannabis-like molecules to those nerves, we’d actually be able to repair them and reduce the pain of arthritis.

As the scientific community continues to research the benefits of medical marijuana, qualified physicians are on the forefront of applying this innovative method of pain management.

CannaMD‘s state-licensed doctors are available to help you control your arthritis pain safely.