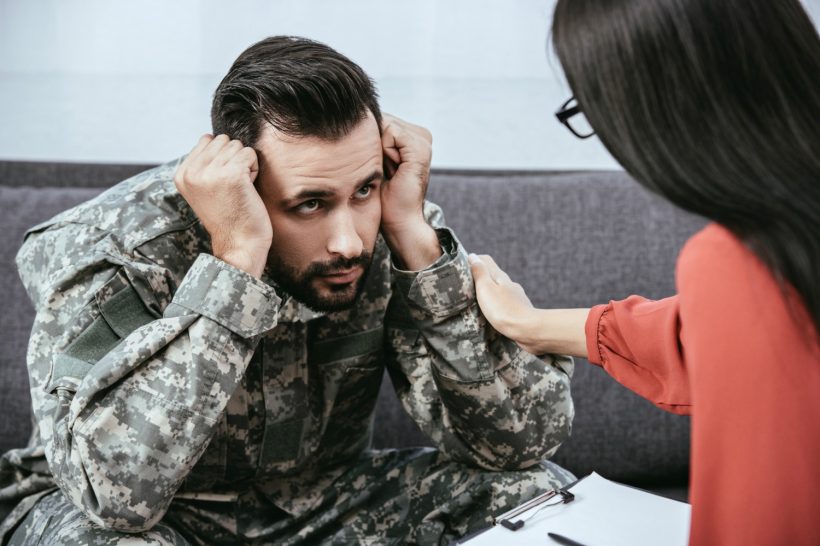 For many years, the best indication of marijuana’s efficacy for PTSD treatment was anecdotal, with sufferers describing benefits such as anxiety reduction and insomnia relief. Now, new studies seek to quantify evidence that supports these assertions and shed light on the ways in which the various compounds found within marijuana provide relief.

PTSD is a disorder that may develop in individuals who have experienced or witnessed a shocking, frightening or dangerous event. Such events often trigger the body’s natural defenses, creating what is known as the “fight or flight” response. In most cases, this response is short-lived, and the individual is able to move past the triggering event. Some, however, may continue to feel ongoing stress or fright long after the event has passed. This is PTSD.

Not all traumatized persons will experience PTSD, and other life experiences such as the death of a loved one can also cause PTSD.  Symptoms of the disorder usually begin within three months of the event, but may take years to manifest.

According to the National Institute of Mental Health, an individual diagnosed with PTSD must have all of the following for at least one month:

How common is PTSD?

According to figures gathered by the Post-Traumatic Stress Disorder Alliance:

Among adult-aged men, the group most susceptible to PTSD are veterans of military conflicts. The U.S. Department of Veterans Affairs study reports indicate that veterans who served during the Vietnam era exhibited a lifetime prevalence of PTSD at 31% for men and 27% for women.

Estimates for PTSD among Iraq and Afghanistan veterans range from lows of 13 to as high as 30%.

Pharmaceuticals May Not Be the Best Treatment for PTSD

PTSD is typically treated with a combination of therapy and medication. Most commonly prescribed are antidepressants such as Prozac, Paxil and Zolof, which act as serotonin re-uptake inhibitors (SSRIs). These drugs address some symptoms of PTSD, yet according to a leading journal of neuropsychopharmacology:

Although SSRIs are associated with an overall response rate of approximately 60% in patients with PTSD, only 20% to 30% of patients achieve complete remission.

In addition, many SSRI drugs have unwanted side effects that can include headaches, nausea, drowsiness, agitation and sexual dysfunction.

While speaking on the subject at an annual psychopharmacology conference, Dr. Charles B. Nemeroff, chairman of the department of psychiatry and behavioral sciences at the University of Miami stated that:

We have no idea what the best treatments are for PTSD.

Continuing the conversation at an annual meeting of the Society of Biological Psychiatry, Dr. Alexander Neumeister, director of the molecular imaging program in the Departments of Psychiatry and Radiology at NYU School of Medicine added:

There’s not a single pharmacological treatment out there that has been developed specifically for PTSD. There’s a consensus among clinicians that existing pharmaceutical treatments such as antidepressant simply do not work.

In fact, we know very well that people with PTSD who use marijuana — a potent cannabinoid — often experience more relief from their symptoms than they do from antidepressants and other psychiatric medications.

Given the limited success of pharmaceutical medications for the treatment of PTSD, the potential negative side effects of these medications, and the limited overall understanding of best treatment practices, it is not surprising that many military veterans and others who suffer from PTSD have turned to alternatives such as medical marijuana, and that more research is now being directed to  the study of its potential benefits.

As an increasing number of PTSD sufferers reported positive results from self-administered marijuana, the first wave of medical research provided a more concrete affirmation of the potential benefits of marijuana and cannabis derivatives. New Mexico was the first state to list PTSD as a qualifying condition for the use of medical marijuana.

A 2009 to 2011 study involving 80 psychiatric evaluations of patients applying for the state’s medical cannabis program concluded that:

Based on the Clinician-Administered Post-Traumatic Scale for DSM-IV, study participants experienced greater than 75% reduction in CAPS symptom scores when patients were using cannabis compared to when they were not.

More evidence comes from a review of literature published in the American Journal of Health-System Pharmacist, which concluded that:

The evaluated evidence indicates that substantial numbers of military veterans with PTSD use cannabis or derivative products to control PTSD symptoms, with some patients reporting benefits in terms of reduced anxiety and insomnia and improved coping ability.

Research has identified a link between PTSD and depressed lower serum levels of the brain lipid anandamide. This molecule has been called the body’s own natural antidepressant, and when anandamide levels are restricted, the result can include a number of undesirable effects on the body, including chronic anxiety, impaired fear extinction, aversive memory consolidation and other symptoms of PTSD.

Anandamide activates CB1 receptors, the same brain receptors that are stimulated by the uptake of tetrahydrocannabinol (TCH) and other compounds found in marijuana.

Nightmares are among the most common symptoms of PTSD, with various reports putting the prevalence of this disorder among military veterans at anywhere from 50 to 90%. Pharmaceutical regimes for the management of nightmares have shown mixed results. Meanwhile, emerging evidence suggests that certain components of marijuana may help reduce the incidence of nightmares among persons suffering from PTSD.

Some of the most compelling evidence comes from a Canadian clinical trial that administered a synthetic cannabinoid known as nabilone. As the study reports:

The results of this study indicate the potential benefits of nabilone, a synthetic cannabinoid, in patients with PTSD experiencing poor control of nightmares with standard pharmacotherapy.

More Evidence is on the Way

Some of the most conclusive evidence to date for the use of medical marijuana in the treatment of PTSD may come from a FDA and DEA-authorized Phase 2 clinical research study of military veterans that is currently under review by the Scottsdale Research Institute.

According to a press release from the Multidisciplinary Association for Psychedelic Studies (MAPS):

This pilot study will gather preliminary evidence of the safety and efficacy of four potencies of smoked marijuana to manage chronic, treatment-resistant post-traumatic stress disorder among 76 veterans. The objectives of this study are to evaluate whether i) smoking whole plant marijuana attenuates PTSD symptoms, ii) to compare the efficacy of varying ratios of THC and CBD to placebo using standard clinical measures, and to iii) collect safety data.

If the trial is successful, MAPS intends to develop future studies and seek use of smoked botanical marijuana as a federally approved prescription drug.

Excitingly, researchers completed trial work on February 8, 2019. According to MAPS, at the time of publication, “data from the study is now being analyzed and prepared for publication later this year in a peer-reviewed biomedical journal.”

We are thrilled to finally be at the finish line of this nearly 10-year saga trying to get this crucial clinical trial completed. We are immensely grateful to all of the study’s supporters, especially the veteran service organizations who helped us with patient recruitment.

In the state of Florida, patients are able to obtain medical marijuana after securing a physician certification for a qualifying condition, such as PTSD.  Of the nearly 175,000 certifications issued in Florida in 2018, more than 41,000 were for the treatment of PTSD, making it the second most common reason behind chronic non-malignant pain.

Importantly for veterans: In May 2018, the House Committee on Veterans Affairs voted unanimously to advance the VA Medicinal Cannabis Research Act to the House floor. The bill encourages the VA to study marijuana as a treatment for PTSD, pain, and other ailments affecting veterans. It also requires the agency to report back to Congress about its progress. (However, VA doctors remain unable to recommend the drug.)

Veterans must not be denied VHA services solely because they are participating in state-approved marijuana programs.

A number of organizations operating within the state of Florida also offer support for veterans seeking relief from PTSD through the use of medical marijuana. Among these groups are:

How to Qualify for Medical Marijuana PTSD Treatment

If you currently suffer from PTSD, CannaMD is here to help! Find out if you qualify for medical marijuana treatment today by completing a quick application or calling 1 (855) 420-9170.