How Does Medical Marijuana Compare to Pain Pills? 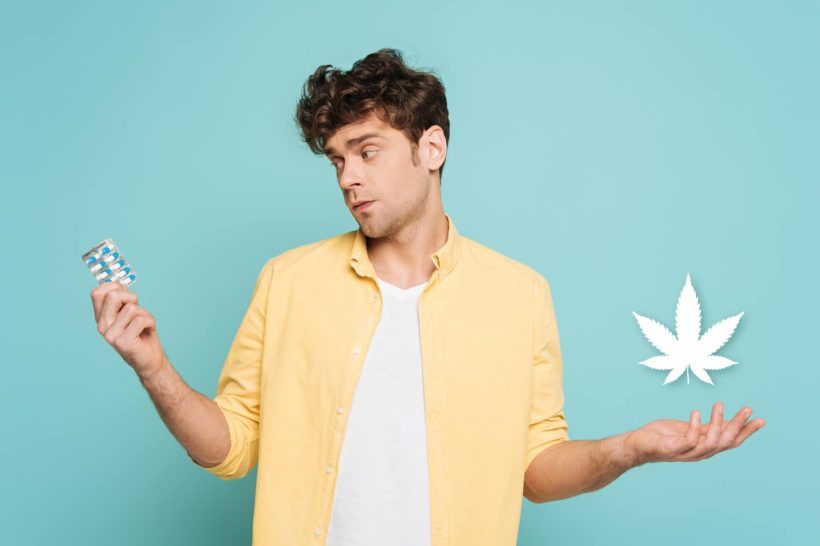 As America continues to struggle with a national opioid addiction crisis, there is evidence to suggest that medical marijuana can play a role in reducing prescription opioid use, and in mitigating the devastating effects of opioid addiction and overdose mortality. As we have reported previously, studies have shown that patients afflicted with chronic pain may prefer marijuana over pain pills, and that increased availability of medical marijuana has been associated with a decrease in opioid prescriptions.

Ongoing research adds additional insights into this trend and reveals the potential value of medical marijuana for opioid recovery.

The Problem With Pain Meds

America’s current opioid crisis is but the latest chapter in a multi-millennial love-hate relationship with the opium poppy. Historic accounts dating to the time of the ancient Sumerians describe both the pain-relieving wonders and the addictive horrors of opium. In the 1800s, the potent opium derivatives morphine and heroin were heralded as wonder drugs, but their widespread adoption and unregulated availability led to devastating waves of addiction, and the eventual regulation of these substances.

The mid 20th-century development of synthetic and semi-synthetic opioids such as fentanyl, oxycodone, and hydromorphone sparked a new era of pain management protocols, and eventually led to a new wave of abuse and addiction. Initially, opioid drugs were employed almost exclusively for pain management during terminal cancer. But as the medical community embraced the concept of pain as the fifth vital sign, opioid drugs were increasingly prescribed for all manner of pain-related afflictions.

Not surprisingly, the increased prescription of these drugs led to corresponding increases in abuse, addiction, and death. A 2015 report from John Hopkins stated:

Drug overdose death rates in the U.S. increased five-fold between 1980 and 2008, making drug overdose the leading cause of injury and death.

By the time the federal government declared the opioid epidemic a national health emergency in 2017, more than 10 million Americans were misusing perception opioids, and some 70,000 were dying from overdoses. In the years since, the annual death toll from opioid overdose has passed the 100,000 mark. And the problem isn’t just among illicit non-prescription users.

The National Institutes of Health reports that:

* About 80% of people who use heroin first misused prescription opioids

A number of sources have reported that the availability of medical marijuana may have a downward impact on prescribed opioid use. An 18-month study conducted in Delaware looked at the effect of adding medical marijuana to existing opioid-based pain management treatment plans. Over an 18-month period, patients who obtained medical cannabis certifications and made use of cannabis for pain management reported a 31% average decrease in opioid use, which translated to an average reduction of 12.3 morphine milligram equivalency (MME), as tracked through the Delaware prescription monitoring program database.

Breaking down these averages into subgroups, the authors reported that:

* Individuals with knee pain reduced their opioid use by 32%

These results led the authors to conclude:

[M]edical cannabis use may help individuals to reduce their opiate requirements.

A survey of medical cannabis users looked at patients with chronic pain who were using medical marijuana to supplement prescribed opioid medications. The authors noted that among the 525 qualified patients who responded:

* 40% reported that they stopped all opioids

* 45% reported some decrease in their opioid usage

* Almost half reported decreased pain in a range from 40-100%

* 62% did not want to take opioids in the future

In addition to these and numerous other studies based on self-reporting, the medical literature includes a growing body of insight based on quantitative data. For example, a survey of Medicaid patients published in the Journal of the American Medical Association Internal Medicine showed that states with medical marijuana laws exhibited a 6% lower per capita rate of opioid prescriptions. The Journal of Health Affairs reports that prescription pain medications authorized by Medicare Part D trend about 12% lower in states with medical marijuana laws than in states without medical marijuana.

A joint study by Harvard Medical School and the University of Kentucky examined changes in prescription opioid use when states enacted medical and recreational marijuana laws. Data was based on opioid prescriptions for adults ages 18 to 64 enrolled in employer-sponsored health insurance programs. Prescriptions were stated in morphine milligram equivalency or MME, which is the number of milligrams of morphine an opioid dose is equal to when prescribed. After examining the data, the research team concluded:

The implementation of medical marijuana laws (MMLs) and recreational marijuana laws (RMLs) reduced morphine milligram equivalents per enrollee by 7% and 13%, respectively. The reduction associated with MMLs was predominately in people aged 55–64, whereas the reduction associated with RMLs was largely in people aged 35–44 and aged 45–54. Our findings suggest that both MMLs and RMLs have the potential to reduce opioid prescribing in the privately insured population, especially for the middle-aged population.

A recently released study conducted by the Allegheny Health Network Institute provides more precise information on actual decreases in dosages of opioid use when medical marijuana was made available. The study involved 115  individuals suffering from chronic pain who had been on an opioid-based pain management plan for a minimum of six months. Study subjects volunteered to add medical marijuana to their pain management therapy. Results from the follow-ups during the initial six months of the trial indicated:

In addition to providing a medication-reducing complement or alternative to patients using legally prescribed opioids, there is some evidence that marijuana can play a limited but real role in opioid addiction recovery.

Anecdotal evidence for marijuana’s potential aid in opioid addiction recovery includes a study published by the peer-reviewed journal, Plos One, with the attention-grabbing title: “I Got a Bunch of Weed to Help Me Through the Withdrawals.” The study text is a bit more mundane, but the conclusions drawn are significant. Based on a broad-based review of social media conversations among groups self-identifying as opioid users, marijuana use was frequently mentioned as a preferred method to manage opioid withdrawal symptoms.

More quantifiable evidence comes from a study published in the Journal of Substance Abuse Treatment. Based on a sampling of 200 individuals engaged in opioid withdrawal, the authors reported that some 62% of participants indicated that cannabis use improved anxiety, tremors, and sleeping difficulties.

Increasing access to medical marijuana may reduce opioid overdose deaths. The first widely cited study to establish a link between the legalization of medical marijuana and a decrease in opioid overdose deaths was released in 2014. The authors began with the postulate that “because chronic pain is a major indication for medical cannabis, laws that establish access to medical cannabis may change overdose mortality related to opioid analgesics in states that have enacted them.”

The association between medical cannabis laws and opioid analgesic overdose mortality in each year after implementation of [medical marijuana legalization laws] showed that such laws were associated with a lower rate of overdose mortality that generally strengthened over time.

More recently, a review of data based on mortality rates in 812 counties in the United States in 23 states providing medical marijuana reported:

Higher medical and recreational storefront dispensary counts are associated with reduced opioid-related death rates, particularly deaths associated with synthetic opioids such as fentanyl. While the associations documented cannot be assumed to be causal, they suggest a potential association between increased prevalence of medical and recreational cannabis dispensaries and reduced opioid-related mortality rates.

As new evidence on the potential benefits of medical marijuana for pain relief and a role in decreased opioid use emerges, CannaMD will continue to keep you informed. If you are suffering from medical conditions that result in chronic pain, we can help. Find out for free if you qualify for medical marijuana treatment!

Questions about getting your Florida medical marijuana card? Call CannaMD at (855) 420-9170!