Feds: If Cows Eat Hemp, Will Milk Make You High? 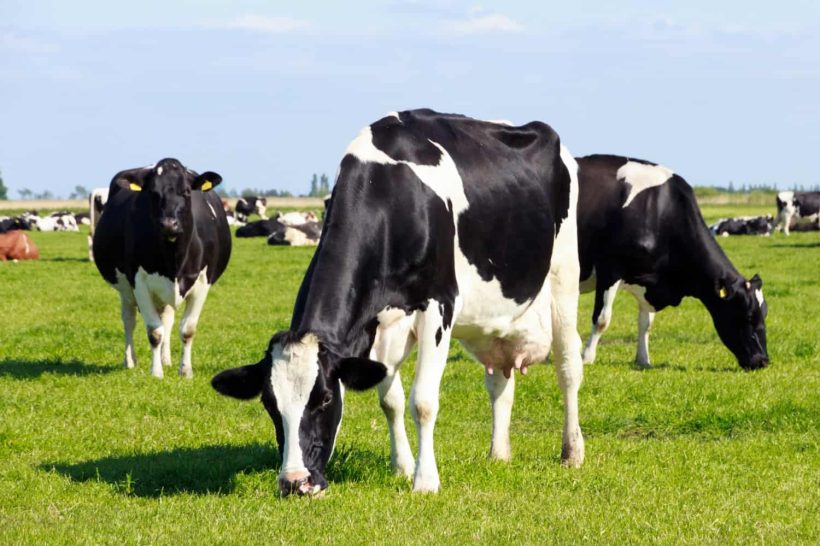 Can a cow get high grazing on hemp? More importantly, if the cow happens to be a dairy cow, can you get high from drinking its milk?

That’s the question the United States Department of Agriculture wants answered – and they’re not afraid to pay $200,000 for it!

Industrial hemp is grown across the U.S. as a legal crop, thanks to the 2018 Farm Bill, which removed hemp as a Schedule I drug. That opened the door for a huge market of hemp products. Genetically, hemp and marijuana are incredibly similar as both are derived from the Cannabis sativa plant. They look and smell the same, but industrial hemp – as defined by U.S. regulations – contains less than 0.3% THC (tetrahydrocannabinol), the psychoactive cannabinoid that creates marijuana’s “high.”

The bottom line? As the Ministry of Hemp explains:

However, as scientists note, most research to date has focused on humans, mice, and swine, but not cattle.

Hemp is a very old crop. George Washington grew it at Mount Vernon and sold it to the Navy to create rope from the robust fibers. Today, hemp is still used from seed to stem; the fibers and oils of the plant are derived and used in many products from the automotive to fabric industries. These days, hemp is increasingly grown for its flowers, from which cannabidiol, or CBD, is derived to make isolate and full-spectrum products which have exploded onto the market.

Because hemp is now legal to grow just like any other crop (with certain restrictions), farmers have tremendous interest in using hemp for other purposes, including animal feed.

Currently, using hemp as livestock feed is prohibited because there is potential for the plant’s natural cannabinoids to accumulate in the milk (or in the meat, for that matter). Scientists have not yet confirmed the degree of this accumulation, therefore the Federal Drug Administration requires approval via the Association of American Feed Control.

Very little is known about the presence of cannabinoids in hemp commercial products, primarily because of hemp’s previous classification as a Schedule I drug by the U.S. Drug Enforcement Administration. For instance, a recently published study in the Journal of Food Composition and Analysis looked at levels of 11 cannabinoids in nearly 150 hemp products. There was a wide variation in cannabinoid content, and fewer than half of the products had a match between the label and actual content, findings that demonstrate the need for rigorous pre- and post-marketplace testing.

Recently, a Kansas state research team received a $200,000 grant from the U.S. Department of Agriculture’s Food Research Initiative to study accumulated concentrations of cannabinoids in the meat and milk of cows fed industrial hemp.

The team of chemists, pharmacologists, toxicologists, and horticulture experts has already demonstrated that hemp cannabinoids are readily absorbed in the cow’s rumen (a large stomach area that stores feed). As Michael Kleinhenz, co-author of the study and assistant professor of beef production medicine at Kansas State University, explains:

Now that we have found that some cannabinoids are readily absorbed from the rumen, the next steps are to study the tissue and milk residue depletion profiles of these compounds after animal feeding experiments.

The effects of cannabinoids on cattle are also unknown.

In addition to these next steps, the team will also look at the effect cannabinoids have on the cow’s immune function and behavior. The end-goal of the research is to contribute knowledge to determine whether hemp feedstuffs are safe for animals.

CannaMD will keep you posted as this second round of research is revealed!

The Future of Hemp Feed for Livestock

Hemp is an incredibly versatile, hardy, drought-resistant crop that can grow in most U.S. climates. While the seeds and hemp fibers are predominantly used for human products, byproducts like leaves, stems and other high-cellulose residual would make excellent animal feed, particularly for ruminant animals like cows.

Hemp was legalized in a stepwise fashion, and over the last decade, some farmers have fed their cows and other livestock with hemp feed. Customers reported the meat tasted cleaner, healthier, and more savory.

Time will tell what hemp-fed milk will taste like, but until then the government is determined to make sure it won’t get you high!

Give CannaMD‘s board-certified physicians a call at (855) 420-9170. You can also fill out an easy online application!