What’s the Difference Between Hemp and Marijuana CBD Oil? 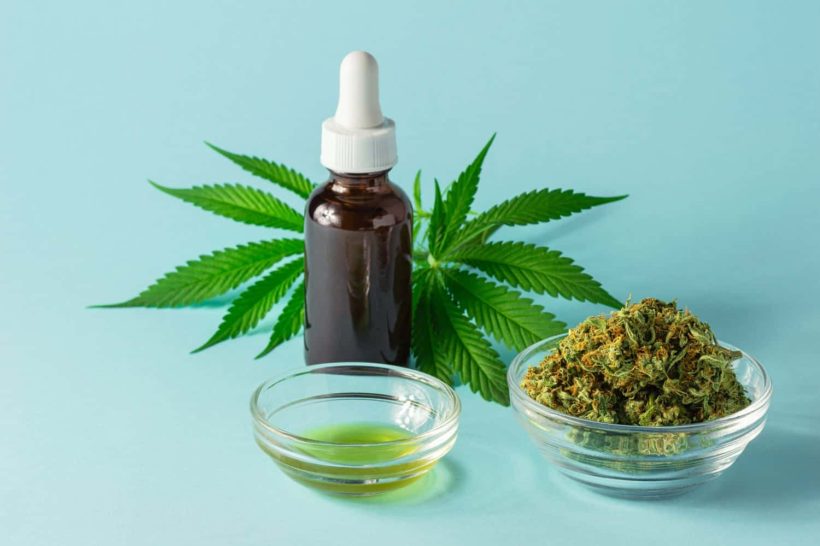 Few things cause more confusion in casual conversation than CBD oil. Although hemp-derived CBD oil and marijuana-derived CBD oil are often mistaken by non-patients as the same thing (“I don’t need a medical marijuana card, I can buy CBD at the gas station!”), the differences between the two products are significant. That’s why today, in honor of National Hemp Day, CannaMD is here to set the record straight!

And the good news? Even though CBD is produced by hemp and marijuana  – and each plant has different legal restrictions and requirements  – understanding the difference between the two isn’t near as confusing as it sounds!

What’s the difference between hemp and marijuana?

Hemp and marijuana come from the same plant genus, Cannabis (part of the Cannabaceae family), which is why the two are so frequently confused. Like any relatives, the two plants share a number of genetic similarities (including cannabinoids, such as CBD). But they also have their own unique, defining features.

Cannabis refers to a genus of plants which has three species: indica, sativa, and ruderalis. Hemp is not a different species of the cannabis plant.

If you’ve ever mistaken the two, don’t feel bad. Even the federal government gets mixed up! In 1970, the United States classified hemp under the Controlled Substances Act (despite decades of agricultural research detailing its differences from marijuana). Fortunately, in 2014, the Federal Farm Bill re-opened the door for industrial hemp research. 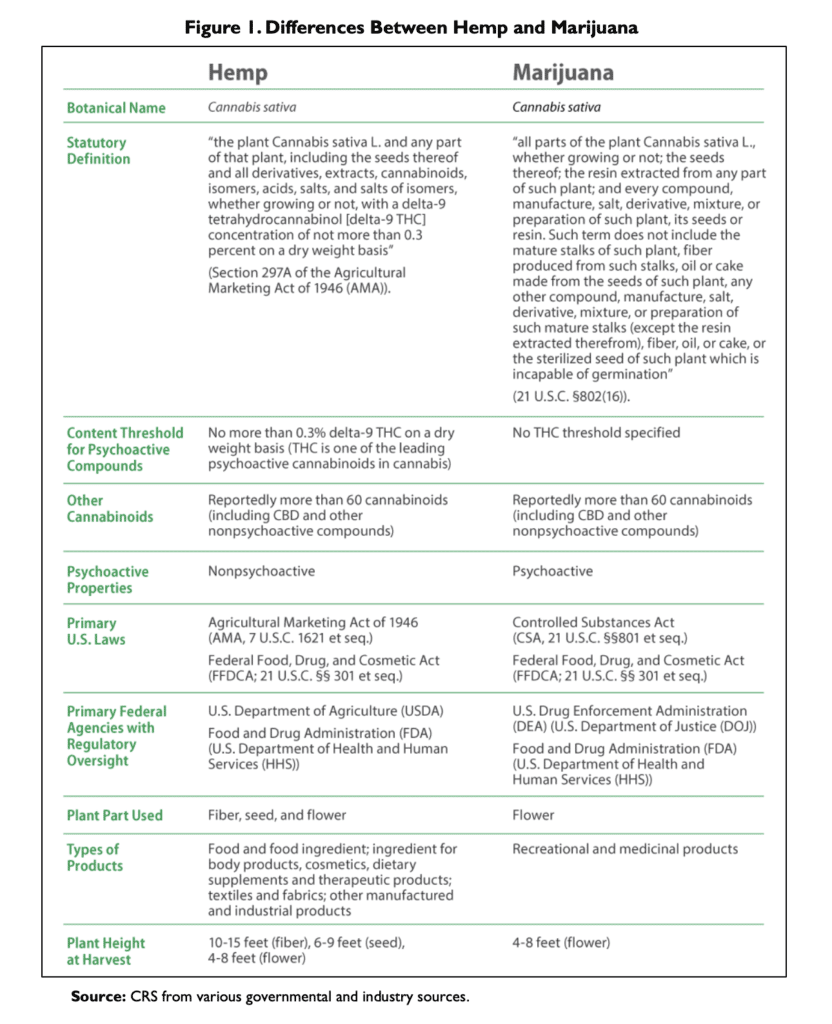 Hemp cultivation dates back to 8,000 B.C. – making it one of the oldest domesticated crops known to man. Hemp seeds are primarily used in food products (such as bread, milk, and cereal) and/or made into oil (including fuel, paint, and ink). Fiber from the stalk is mainly used in clothing and construction. However, while hemp is used in manufacturing, marijuana serves a primarily medical and/or recreational purpose.

Unlike marijuana, hemp plants adapt to most climates and require minimal care. But the difference that really gets everyone talking? Concentration levels of psychoactive cannabinoid, tetrahydrocannabinol (also known as THC). THC is the primary compound responsible for marijuana’s psychoactive effects and is found in much higher levels in marijuana than hemp. While consuming marijuana can often leave a user feeling “high,” as the Ministry of Hemp notes:

But exactly how much more THC does marijuana have than hemp?

The majority of Americans think hemp, by definition, contains 0.3% or less THC. However, this belief is both right and wrong.

The United States government set the definition of hemp as a a Cannabis sativa L. plant not containing more than 0.3% THC. However, other countries have structured their definitions at other levels. For instance, the European Union set the limit at 0.2%, while in Great Britain the limit is zero, unless growers have a cultivation license to grow industrial hemp with no more than 0.2% THC.

So yes, the American definition prohibits hemp from containing more than 0.3% THC, but hemp – as a plant – isn’t inherently limited to a specific THC threshold. Lawmakers simply set a THC cut off point for legal definitions.

As the Congressional Research Service reminds us:

The term ‘industrial hemp’ dates back to the 1960s and generally refers to cannabis varieties that are grown primarily as an agricultural crop, such as seeds and fiber and byproducts such as oil, seed cake, and hurds. Hemp is generally characterized by plants that are low in delta-9 THC, the
dominant psychotrophic compound in Cannabis sativa. In addition to its low THC content, hemp generally has high levels of CBD, the primary nonpsychotropic compound in Cannabis sativa. Accordingly, a high ratio of CBD to THC might also be a metric used to differentiate hemp from other cannabis varieties.

Although hemp and marijuana are from the same cannabis plant, available research supports the conclusion that selective breeding has resulted in two separate strains.

So we’re looking at the same plant, grown under different agricultural circumstances, that resulted in two different strains. They share many of the same chemical compounds (cannabinoids), but to varying degrees. One of the strains (hemp) tends to have less THC and more CBD. However, these cannabinoid levels aren’t set in stone; rather, they’re defined by lawmaking/governing bodies. The United States, for instance, has set the THC level of hemp to 0.3%.

Now that we have the basics under our belt, understanding the differences between oils produced by both plants will be a breeze!

All CBD oil is not the same

But if CBD is the same compound in both plants, why does it matter which oil you use?

The easiest answer is that the CBD doesn’t act alone. Its “behavior” is often enhanced and/or altered by the presence of other cannabinoids (known as the whole plant or entourage effect). The presence of terpenes can also play a large role. Since the levels of various cannabinoids (such as THC) can differ between marijuana and hemp, many feel that marijuana-derived CBD oil offers a better experience that allows CBD to “perform at its full potential.”

Researchers are also quick to point out that marijuana-derived CBD, often referred to as cannabis oil, may be safer and more effective. According to Project CBD:

A huge amount of industrial hemp is required to extract a small amount of CBD. This raises the risk of contaminants as hemp is a bioaccumulator – meaning the plant naturally draws toxins from the soil.

Cannabis represents a richer source of cannabinoids and terpenes than industrial hemp because it contains significantly more resin. Resin is the sticky, gooey substance found on female cannabis flowers, and to a lesser extent, on its leaves. Hemp contains resin on the flowers and leaves too, but much less. Most industrial hemp cultivators need to grow large quantities of hemp to produce CBD oil, although there are now more CBD-rich hemp strains being cultivated.

Another con to choosing hemp-derived CBD oil? Lack of regulatory oversight (resulting in lackluster products). While oils are strictly regulated in the marijuana industry – so patients and recreational users know exactly what they’re buying – the same standards are missing from hemp production. According to a recent investigation of 47 hemp-derived CBD products, almost half of the surveyed items didn’t come within 20% of the labeled dosage!

NOTE: CBD can also be extracted from both plants to create an isolate. Isolates only contain CBD molecules, so they’re identical whether they come from hemp or marijuana. However, this is not the type of hemp CBD product most commonly sold in non-dispensary settings (and again, regulation issues still exist).

Which is Better: Hemp or Marijuana CBD Oil?

Not only is it safer (due to less bioaccumulation) and more reliable (thanks to industry regulation), the product itself is also more effective (containing a wider terpene and cannabinoid profile, contributing to the entourage effect).

However, full-spectrum and broad-spectrum hemp-derived CBD products may not have the potency of CBD derived from cannabis because trace amounts of THC appear to be less effective in treating certain symptoms.

The only catch? If you don’t live in a state with legal recreational marijuana, you currently need a medical marijuana card to purchase marijuana-derived CBD oil. Luckily for Florida patients, CannaMD makes that part easy!

Getting started is as easy as filling out a quick online application! You can also give CannaMD‘s board-certified physicians a call at (855) 420-9170! We’re always here to help!