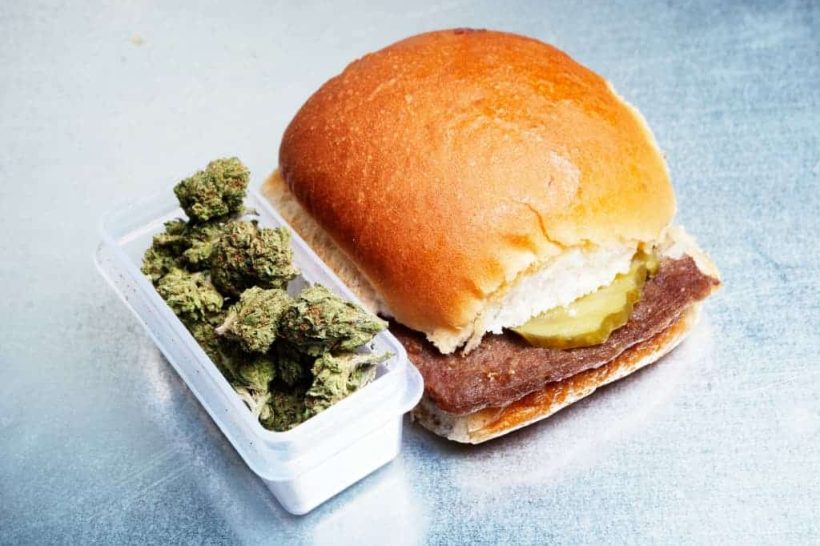 In 2011, the American Journal of Epidemiology reviewed two population-based nationally representative studies exploring the relationship between marijuana use and obesity. After analyzing results from over 50,000 respondents, researchers concluded:

The prevalence of obesity was significantly lower in cannabis users than in nonusers […] The proportion of obese participants decreased with the frequency of cannabis use.

This cross-sectional analysis indicated that despite the evidence that cannabis use stimulates appetite in clinical trials and laboratory studies, cannabis users are actually less likely to be obese than nonusers in the general population.

Likewise, a study from 2006 found that even though marijuana use may be correlated with increased caloric intake, it is not associated with higher body mass index (BMI) or glucose levels.

While surprising to some, a number of studies have found similar results. In 2014, researchers reviewed data from 786 participants, concluding:

Approaching the issue from a different angle, The American Journal of Medicine published supporting results, noting:

So what’s going on?

No one knows for sure, but researchers think it might have something do with how marijuana affects adipose tissue (fat) metabolism or possibly cannabinoid receptor CB1 (the principal brain receptor mediating marijuana’s effects). Interestingly, the same researchers did not find that glucose metabolism was involved with the cannabis/BMI connection; however, other studies suggest a possible degree of involvement.

In addition to lower rates of obesity, cannabis users also demonstrate a lower risk for diabetes, with a recent study concluding:

(Results were so impressive that Time followed up with an article titled, Marijuana: The Next Diabetes Drug?.)

The most important finding is that current users of marijuana appeared to have better carbohydrate metabolism than nonusers. Their fasting insulin levels were lower, and they appeared to be less resistant to the insulin produced by their body to maintain a normal blood-sugar level.

Again, researchers are unsure of marijuana’s exact mechanism of action; however, one hypothesis points to the role of myrcene (the most abundant terpene in cannabis). Scientists from the University of Jordan found that myrcene and thujone (a non-cannabis, naturally occurring chemical compound) produced a “pronounced hypoglycemic effect” in diabetic rats.

If you’re currently struggling with health issues, complete a free pre-screening today to see if you qualify for medical marijuana treatment.

Have experience with today’s topic? Let us know in the comments section below!