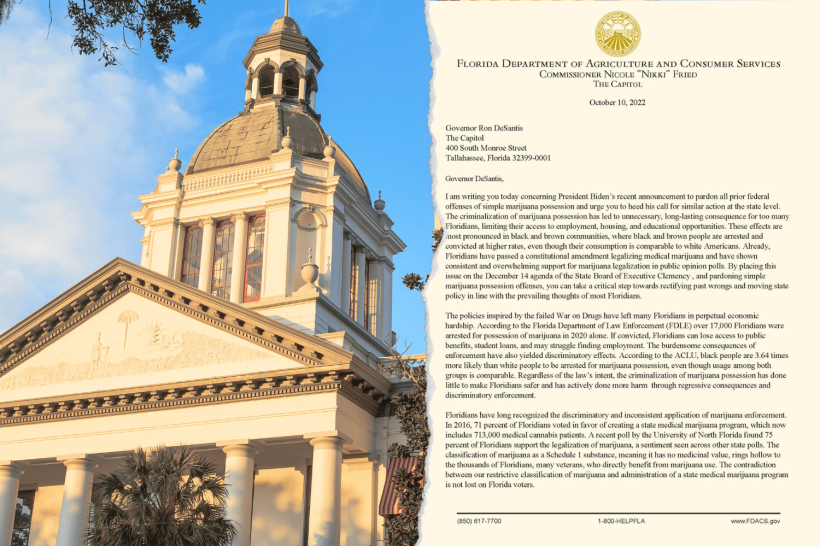 This week, Florida’s Agriculture Commissioner, Nikki Fried, and State Senator, Shevrin Jones, implored Governor Ron DeSantis to consider a path forward where Floridians who have been convicted of simple marijuana possession might be pardoned.

In Nikki Fried’s recent letter to the Governor, she explicitly requested that cannabis pardons be on the agenda for the next State Board of Executive Clemency meeting, happening on December 14, 2022:

By placing this issue on the December 14 agenda of the State Board of Executive Clemency, and pardoning simple marijuana possession offenses, you can take a critical step towards rectifying past wrongs and moving state policy in line with the prevailing thoughts of most Floridians.

Her letter closes with a final plea,

Often, the right decision and the popular decision are not the same, however this is an opportunity to accomplish both. 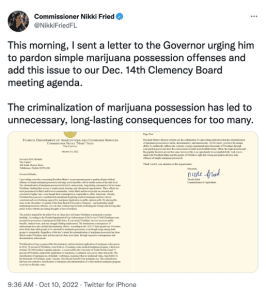 In addition to Nikki Fried, Florida Senator, Shevrin Jones, has also requested that Gov. DeSantis consider pardoning Floridians convicted of simple marijuana charges. His letter highlights the prevalence of marijuana cases that are prosecuted at the state level rather than the federal level. Jones writes:

As you know, the majority of possession convictions happen at the state level rather than the federal level, which means that without similar action here in Florida, many Floridians will still carry the burden of their conviction.

He goes on to state,

Today, many Floridians continue to struggle to find employment, obtain housing, or to further their education because of a past conviction for simple possession of a substance that is already decriminalized for approximately two out of five Floridians at the local level. 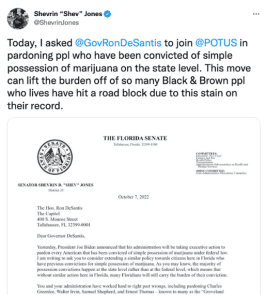 These letters from Nikki Fried and Shevrin Jones follow the latest federal marijuana pardons that were put into effect on October 6th, 2022. Along with these pardons, the POTUS has requested that all governors follow suit and enact similar policies within their prospective states.

McKenzie Lewis has been a member of the CannaMD marketing team since 2018. Prior to joining CannaMD, she attended the University of Central Florida where she received a Bachelor’s of Science degree in psychology. When it comes to cannabis research, she is especially interested in the application of marijuana as a treatment method for insomnia.
Categories
Related PostS