On December 2, 2020, the United Nations (U.N.) formally reclassified cannabis, removing the substance from Schedule IV (although cannabis and its derivatives still remain in Schedule I).

Wondering what this means for the future of medical and recreational marijuana use in the United States? CannaMD breaks down everything you need to know!

Until today’s historic vote, cannabis was listed as a Schedule IV substance under the 1961 U.N. Single Convention on Narcotic Drugs. According to the United Nations:

The [1961 U.N. Single] Convention aims to combat drug abuse by coordinated international action. There are two forms of intervention and control that work together. First, it seeks to limit the possession, use, trade in, distribution, import, export, manufacture and production of drugs exclusively to medical and scientific purposes. Second, it combats drug trafficking through international cooperation to deter and discourage drug traffickers.

As illustrated by Prohibition Partners, Schedule IV includes the “most dangerous substances” which are “particularly harmful” and of “extremely limited” medical value. 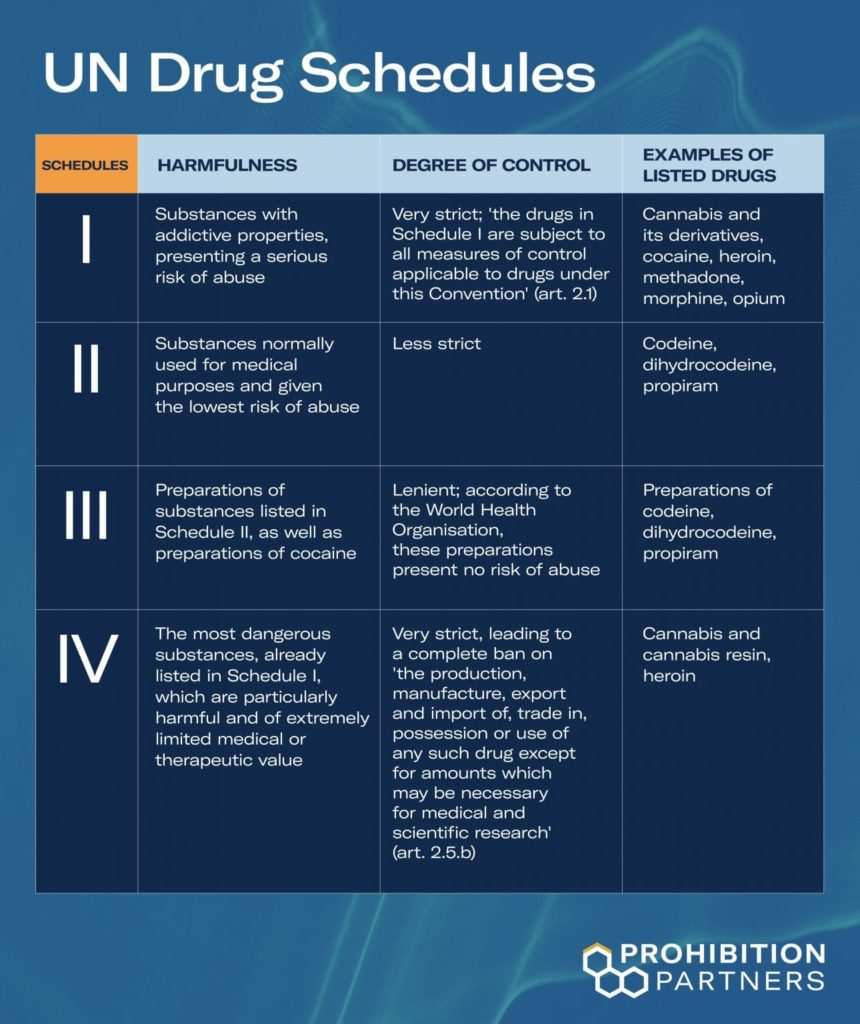 However, with the passage of Recommendation 5.1 – “[To] delete cannabis and cannabis resin from Schedule IV of the 1961 Convention” – the U.N. voted to acknowledge marijuana’s potential medical and therapeutic value.

The United States voted in favor, while other countries, including China, Egypt, Nigeria, Pakistan and Russia, voted against. (China’s delegate said that the country would continue to strictly control cannabis “to protect from harm and abuse.”)

While cannabis and its derivatives still remain in Schedule I (as a “substance with addictive properties”), removal from Schedule IV is significant.

As Ethan Glick, a U.S. representative present at the vote, explains:

This action has the potential to stimulate global research into the therapeutic potential and public health effects of cannabis and to attract additional investigators to the field including those who may have been deterred by the Schedule IV status.

Something like this does not mean that legalization is just going to happen around the world. But it could be a watershed moment.

What does U.N. marijuana reclassification mean for the U.S.?

Gaining approval with 27 votes in favor, one abstention, and 25 votes against, Recommendation 5.1 marks an unprecedented shift in the United Nation’s stance on marijuana. But what does this change mean for the United States?

According to Marijuana Business Daily:

The passage of Recommendation 5.1 carries broad symbolic significance for medical cannabis, as it could help boost medical cannabis legalization efforts around the globe now that the United Nations Commission on Narcotic Drugs (CND) tacitly acknowledges the medical utility of the drug.

As Martin Jelsma, Drugs and Democracy Program Director at the Transnational Institute, explains:

The medical cannabis wave has accelerated in recent years already, but this will give it another boost. And for those countries that basically mirror the U.N. scheduling in their domestic legislation, it may lead to national descheduling and remove obstacles to use cannabis for medical and research purposes.

Whether the U.S. will follow suit remains to be seen. At this time, marijuana is still classified as a Schedule I substance in the United States. (Keep in mind: Scheduling classifications and descriptions differ between the United Nations and individual countries.)

The future of marijuana scheduling

Although cannabis advocates are celebrating, some worry that the United Nations didn’t go far enough. As it stands, cannabis is still listed by the U.N. as a Schedule I substance (in the same class as fentanyl). However, experts argue that removing marijuana from Schedule IV is a huge step forward, paving the way for inevitable change.

While there’s still more work to be done, CannaMD joins medical marijuana physicians and researchers around the world in celebrating today’s international acknowledgement of marijuana’s therapeutic value. We’re honored to help Florida patients in need –  and, through our research initiatives with various universities and institutions, to continue advancing the field of medical marijuana one small study at a time!

Curious if cannabis can help? Give CannaMD‘s board-certified doctors a call at (855) 420-9170 or fill out an easy online application!

Find Out if You Qualify

You may be eligible for medical marijuana!

How can I be an Advocate for CannaMD and I have sent many different people who CannaMD has been making life changes for better Health Care ❤.

We’re honored to have your support! Thank you for helping us change lives through the healing power of MMJ! 🙂

I have a medical marijuana card.it expired.its very expensive and have to renew every 7 months.it does help me,but so expensive.will it be easier to afford?and can I just renew my card .or do I have to go to Dr and go thru it all over again.i have chronic pain.and not working at this point?